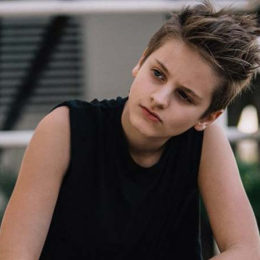 In the 21st century, there are many social media platforms which allow people to showcase their skills and make both fame and fortune. Mark Thomas is one of those youngsters who grabbed those web opportunities and made name for himself. He is a famous internet celebrity who is popular for his Musical.ly(Tik Tok) videos, YouTube videos, and Instagram posts. The 18-year-old Instagram star is also recognized for his songs like Selfie, Chapstick, and Side Chick.

Who is Mark Thomas? Is he Dating someone? Know about his Personal Life

Thomas, the teen internet sensation is probably not single in 2020. The Pennsylvania born star hasn't yet confirmed his present relationship status nor he's introduced anyone as his girlfriend.

Mark will soon reveal his someone special took an intimate snap of himself kissed by a girl on March 2, 2020 while his visit to Orando World Center Mariott.

Similarly, he took another video kissed by a blonde-haired girl in his chick withing the club on March 31, 2019. Seems like, Thomas is a lover boy who always seeks love and attention of beautiful girls around him.

Mark Thomas is dating the famous Instagram star, Bridget Paddock. The duo first met a couple of times before officially starting their relationship in 2019.

Despite the small period of time, the pair are deeply in love and often shares their pictures together in their respective social media.

The Internet sensation was previously rumored to dating the famous actress Jordyn Jones in December of 2015. The couple was often spotted together in public events and featured in one another social sites. Despite, there is no solid proof about their relationship.

In a similar manner, Mark was also rumored for dating his long-term friend Loren Gray in August of 2016. Like his previous rumored relation, Mark used to share a lot of posts with Loren. Mark explains Loren as his best friend and denies their dating relationship.

The Instagram star is currently is out of any controversies. He prefers to make his personal life low-key, therefore, does not share much about his dating life. Besides, he uses modern means of communications from time to time including Instagram, Facebook, and Twitter.

Thomas, the 19-year-old Instagram star tested coronavirus positive in April of 2020. Therefore, he decided to make a video to spread some awareness to self and reveal his health condition. Amid the 2 weeks quarantine.

Mark consumed a lot of vitamins that help boost his immune system. He says, it may not 100% cure or help the virus go because everyone's case is different.

What much is the Net Worth of Mark Thomas?

Mark Thomas possess an estimated net worth of $1 million. He grabbed that net worth by working in many social media platforms. In addition, the average salary of a YouTuber is $57,200 and Instagram star $5,000 per 100,000 followers.

Mark first appeared on the app Musical.ly(now named TikTok) from where he grabbed the attention of many viewers. He ended up collecting a grand fan following of 5 million on the app. Then, he shifted to use Instagram and Youtube and accumulated a good sum to uplift his future.

Until now, Mark published some good music singles like Selfie, Chapstick, and Side Chick which was loved by many fans. Furthermore, he uploads many videos with different topics and tries to make his fans happy with his work.