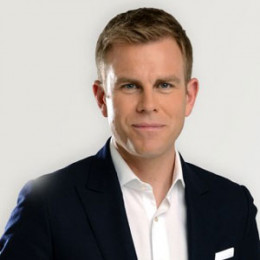 Matthew Laurence Barbet, better known as Matt Barbet, is a British television presenter and journalist. He is known for his work with Channel 5 and ITV. He also co-presented the Daybreak along with Ranvir Singh before he returned to 5 News Tonight. Apart from TV journalist, he is also an accomplished runner and road cyclist.

Matt Barbet was born on 8th June 1976, Chester, Cheshire, England and grew up in the city of north Wales. He attended the Alun School in Mold, Flintshire and moved to Cardiff University.

He started his career from BBC London in 2003. He worked as a newsreader on the Sara Cox Breakfast Show at BBC Radio 1. He also presented BBC London’s Children in Need coverage, BBC’s STORYFix program, BBC News 24, BBC website and become an occasional relief presenter for BBC Breakfast.

Later, he was named as a presenter and correspondent for 5 News on Channel 5 after Kristy Young left the program in 2007. The following year, he along with Isla Traquair were announced as a stand-in presenter on 5 News after Natasha Kaplinsky was on maternity leave.

During 2010, Matt visited Haiti after the earthquake and also embedded with British Army in Afghanistan. He presented the show flagship 17:00 program and left the show on 26th July 2012.

On 3rd September 2012, he presented ITV Breakfast’s Daybreak from 6 a.m to 7 a.m along with Ranvir Singh. He also occasionally reviewed the news on This Morning during the period. The show Breakfast was later renamed Good Morning Britain on 3rd March 2014.

He returned and joined 5 News on 16th April 2014 and hosted the show 5 News Tonight weekdays at 6:30 pm. Later, he co-presented The Saturday Show for Channel 5 in October 2015 and left the show in July 2016, which was replaced by Matt Allwright.

Matt is married to his long-term girlfriend Katie Barbet. The husband and wife are blessed with two daughters: Manon and Blythe.

He is also involved in different charity show and ran the London Marathon in 2010 and 2016. He is also an accomplished runner and road cyclist. He has ridden the first three Ride London event. He was the fastest celebrity to cross the line completing the 100-mile course in 4 hours 24 minutes. He raised more than £400,000 as a patron of Norwood.

Matt is one of the successful British journalists who has spent his life in the field of journalism. His source of income include anchoring and presenting. Looking at his success and lavish lifestyle, he probably enjoys a net worth more than seven figures. Currently, he is residing in the luxurious house in London with his family.

Katie and Matt are living a blissful married life along with their two children. Currently, the family resides in London.