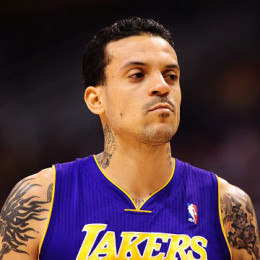 Matt Barnes is an American professional basketball player, currently playing for the Golden State Warriors of the National Basketball Association.

Matt Barnes was born on 9th March 1980 in Santa Clara, California, to his African father and a Caucasian mother. He joined Del Campo High School in Fair Oaks, California, where he served as a letterman in basketball and football.

During his college days, Barnes earned All-State, All-CIF, All-City, All-American, and All-League honors in every sport.

Matt Barnes was chosen with 46th overall pick by6 Memphis Grizzlies in 2002 NBA draft and was exchanged with Nick Anderson, to the Cleveland Cavaliers for Wesley Person.

The small forward of Golden State Warrior also signed with the Long Beach Jam for the ABA for their beginning season in 2003, where Barnes played with Dennis Rodman. The team won ABA Championship 24-7.

He had an average score of 18.9 points and 6.8 rebounds and later turned his performance into a contract with the Los Angeles Clippers for the second half of the season 2003-2004.

In 2005, Barnes signed a free agent contract with the New York Knicks. Though he seems to secure a beginning job with an impressing preseason and Allan Houston's retirement, he was abandoned by the Knicks after playing for six games. Barnes again rolled into 76ers to in Philadelphia, where he completed his second season.

Matt Barnes signed with the Golden State Warriors before the first day of training in October 2006. He raised his fame and status in the league after he joined the team. On 26 December 2006, he scored seven three-point field goals to tie a Warriors franchise record. Later on 29 March 2009, the record was broken by Jason Richardson with 8 three-pointers.

Before he signed with with Golden State, the small forward had only scored 10 three-pointers. In the 2006-2007 season, he made 106. After he joined Golden State, his offensive game improved.

On 6 August 2007, he returned to Warriors signing a one year contract.

On 22nd July 2008, Matt Barnes signed a contract with the Pheonix Suns for a year. On 14 November 2008, he received a two-game suspension for his credit in the scuffle with Rafer Alston two days before.

On 23rd July 2009, the small forward was offered a two-year contract with the Orlando Magic. Though Barnes was able to opt out of the deal after the first year, he said that he wanted to remain in Orlando.

On 23rd July 2010, Barnes signed a contract with the Los Angeles Lakers for two years.

Return to the Clippers

In September 2012, Matt Barnes signed with the Los Angeles Clippers. On 31st October 2012, Barnes was suspended by the NBA for one game after he pleaded no contest for delaying a police officer.

In 2013, July 10, he re-signed with the Clippers to a multi-year deal. In 2013 November, he was fined $25,000 for not leaving the court in a manner after an ejection in a game against the Oklahoma City Thunder.

On 9th July 2016, he agreed to a contract with Sacramento Kings. On 20 Feb 2017, Barnes was abandoned by the club, to make room for three players the Kings acquired in the DeMarcus Cousins trade.

On 2nd March, the small forward signed with the Golden State Warriors. The Warriors' forward, Kevin Durant, had an MCL injury, which left a vacancy for a forward.

Matt Barnes first met Gloria Govan (his ex-wife) when he was in eighth grade. When he started playing for the Golden State Warriors, he had to move nearby Govan's home in 2006.

Soon, they both began dating and married on 11 August 2013. They also have twins together, Carter Kelly Barnes, Isaiah Michael Barnes, born on 6th November 2008.

In 2010, Matt Barnes was busted for domestic violence against his wife and for driving with an illegal license and misbehaving with the police officer in 2012. The couple separated in 2014. After two years of their separation, the couple divorced on 21 December 2016.

Matt Barnes earns a decent sum from his successful career as a professional basketball player. He was drafted 46 overall in the 2002 NBA Draft. Playing for different NBA clubs, he has collected a net worth of $10 million.

Barnes signed his biggest contract in 2016 with the Sacramento Kings with a two year $12.5 million. He also owns a Ferrari 488 Spyder.

The couple stayed together for 3 years, and share twins. The couple divorced due to the misbehavior of Matt Barnes against his wife.

Carter is one-half of the twins.

He is other half of the twins.