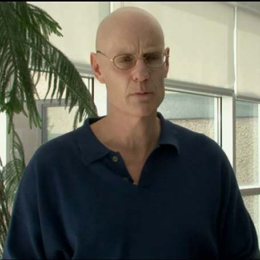 Canadian-American actor, Matt Frewer is an award-winning versatile person who is respected and praised in Hollywood for his acting and acting skills. The 61-year-old actor is also popular as a voice artist and comedian better known for working in movies like Generation X, Speed Zone, Rampage, and Night at the Museum: Secret of the Tomb. The Canadian actor is also recognized for starring in the Netflix series named The Order.

He won the CableACE Award and Gemini Award for his brilliant performance on the screen. He also caught fame after marrying the Famous English actress Amanda Hillwood.

Personal Life of Matt Frewer; Is he Married?

Matt Frewer is married to the famous English actress Amanda Hillwood. The duo shares a diamond-strong bond and is in over three decades of a marital relationship. The pair will be celebrating their 35th marital anniversary in 2019.

The couple dated for a couple of years and finally shared the wedding vows in 1984 among their close friends and relatives. Matt is a private person when it comes to his personal life and never shares information regarding his early life in front of the media.

The pair is a proud parent of their only children who is a daughter. Further, it seems like Frewer and his wife are concerned about their daughter's future as they do not share any information regarding her.

Matt is currently out of any rumors and controversies regarding any affairs. It looks like Matt and his wife are living a blissful life as there is no sign of divorce between them. Additionally, the duo currently resides happily in their house at Marina del Rey, California.

How much is the Net Worth of Matt Frewer? Also, Know about his Salary and Earnings;

Matt Frewer holds an estimated net worth of $1 million. He was able to grab that fortune with the help of many acting projects throughout his life. In addition, the average salary of a film actor is $17.00 per hour and $81,000 per year. Similarly, the average salary of a television actor varies from $9.39 per hour to $100,000 per hour, depending upon the popularity of the actor.

Matt is currently working in the horror drama web Netflix series named The Order along with the acting sensations like Jake Manley, Sarah Grey, Sam Trammell, and Max Martini. Besides, he debuted in the television industry by acting in the 1984 television series named The First Olympics: Athens 1896. Since then, he appeared in many television series including famous series like Robin of Sherwood, Miami Vice, In Search of Dr. Seuss, Altered Carbon, The Truth About the Harry Quebert Affair and many more.

The Netflix actor also worked in the film industry by debuting in 1983 American film named The Lords of Discipline with the role name of Senior. After that, there were no bars to hold him and he ended up staring in more than 45 films. Some of his famous films are Twenty Bucks, Return to Two Moon Junction, Hercules, Generation X, 50/50, Foreverland, Rampage and many more. One of his film named Night At the Museum: Secret of the Tomb was a blockbuster which collected over $363.2 million on the box office against the budget of $127 million.

Matt Frewer is married to the famous English actress Amanda Hillwood. The duo shares a diamond-strong bond and is in over three decades of a marital relationship. The pair will be celebrating their 35th marital anniversary in 2019.