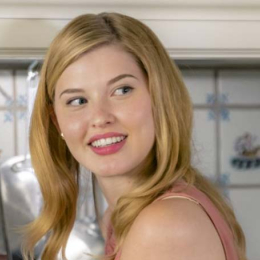 Talented Canadian actress, Sarah Grey is better known for working in famous movies like Power Rangers and Cinemanovels. The 22-year-old actress is also popular for working in the television series like Almost Human, Once Upon a Time and Netflix series The Order.

Personal Life of Sarah Grey; Is she Dating Someone?

Sarah Grey is possibly single and not dating anyone at the moemnt. The well-known Canadian actress is focused on her career and is out of any dating rumors. Moreover, she shares a close bond with her family and loves to spend time with them.

Famous Canadian actress Sarah Grey during one of her photoshoot.

The talented actress is out of any controversies regarding any personal and professional life. She is concerned about her acting future and is never spotted with any men in any events and award functions outside of the reel life. Additionally, she is a fun loving person and goes to spend time in nature whenever it is possible.

What is the Net Worth of Sarah Grey?

Sarah Grey holds an estimated net worth of $300,000. She collected that fortune by working in many modeling and acting campaigns. In addition, the average salary of an actress is $35,000 for beginners and $100,000 for talented performers. Likewise, the average salary of a model is $49,200, besides, it depends on the volume of the project and the popularity of the model.

Sarah is an active person on social media and uses Instagram from time to time. She often posts many pictures regarding her personal life and professional life with the addition of some promotional posts. Further, she earns over $325.5-$542.5 per post from her Instagram account.

Grey her acting career in the big screen by working in 2013 Canadian comedy movie named Cinemanovels with the role of Julia. Since then she appeared in many films like Embrace of the Vampire, Power Rangers, Last Night in Suburbia.

The  Cinemanovels actress also tried her luck in the same year of 2013 by working in the American science fiction series named Almost Human with the role of Lila. After that, she worked in the numerous television series like Bates Motel, 'Liar, Liar, Vampire', Lucifer, The Wedding March, Once Upon a Time and many more. Besides, she is currently starring in the Netflix series named The Order along with the stars like Jake Manley, Matt Frewer, Sam Trammell, Max Martini.

Sarah Grey was born on 19 May 1996 in Nanaimo, British Columbia, Canada under the birth sign of Taurus. She was raised along with her elder sister by her parents. Furthermore, she is a private person and prefers to keep the information regarding her early life within herself.