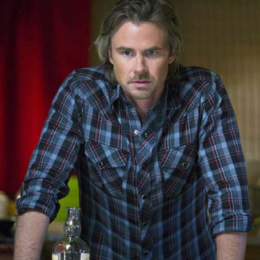 Sam Trammell is one of the famous Hollywood actors better known for working in the HBO fantasy drama series named True Blood. The 50-year-old actor is also known for starring in the blockbuster films like Aliens vs. Predator: Requiem, 3 Generations, and I See You. He is also recognized for working in 2019 horror drama Netflix series, The Order.

Personal Life of Sam Trammell; Is He Married? Know about his Relationship Status:

Sam Trammell is in a dating relationship with his longtime girlfriend Missy Yager. Missy is an American actress known for working in the film Happy Death Day 2U. Moreover, the duo is in a healthy relationship and are now together for over one decade. In fact, they are about to share their sixteenth year of togetherness. Despite this beautiful bond they haven't yet decided to share the wedding vows.

The couple is a proud parent of their twin sons named Gus Trammell and Winston Trammell. As being a twin, they both were born on 9 August 2011. The pair is quite protective about their sons and prefers to keep them low key.

Trammell is out of any rumors and controversies regarding his dating life and affair life. Similarly, he is never spotted with any other girl outside of the reel life except with his love of life Missy. Additionally, Sam is a career focused person and does not use any social media platforms.

What is the Net Worth of Sam Trammell?

Sam is currently working in the Netflix series named The Order along with stars like Jake Manley, Sarah Grey, Matt Frewer, and Max Martini. Besides, he started his television career by working in the American CBS television film named Harvest of Fire in 1996 with a role name of Simon Troyer. After that, he appeared in many hit television series like Maximum Bob, Trinity, Cold Case, True Blood, Law & Order: Criminal Intent and This Is Us.

The True Blood actor made his acting debut in the film industry by working in 1996 American film named Childhood's End with a character name of Greg Chute. Since then, he starred in more than thirty films including Beat, Aliens vs. Predator: Requiem, White Rabbit, 3 Generations, I See You and many more. Moreover, is most recent work was in the American teen mystery film named Nancy Drew and the Hidden Staircase in 2019.

The couple is a proud parent of their twin sons, and one of them is Gus Trammell who was born on 9 August 2011.

The couple is a proud parent of their twin sons, and one of them is Winston Trammell who was born on 9 August 2011.