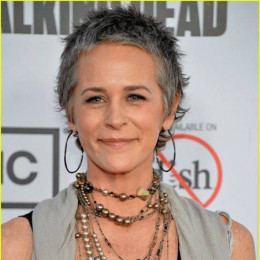 An American actress and former casting director who is widely known as her role as Carol Peletier on an AMC television horror drama series, The Walking Dead. Talking about her family her father was a business owner and her mother used to study at the historic Pasadena Playhouse. She has three siblings. In early 1991 she started her career by starring in TV commercials like in Rooms To Go as well as being a spokeswoman for Ford. Later in 1993 she started starring in some episodes of ABC legal drama series Matlock. She has already starred in TV series like In the Heat of the Night; American Gothic; Profiler; Walker, Texas Ranger. She has won many awards and nomination for her role on The Walking Dead.

Once there was a rumor that she was fighting with cancer but later she turned down the rumor saying that it is false. Talking about her personal life she is still unmarried i.e. she is still single.

Till now there is no rumor regarding her affair with anyone. It seems like she wants to keep her private life out of sight of the media. She has not disclosed even a bit of information about her private life in public.

Among many other mysterious personalities, Melissa McBride is one of them who prefers to keep her personal life away from media. It would not surprise anyone if we say McBride is in a romantic relationship with her Walking Dead co-star Norman Reedus since its season 2.

Fans speculate that the two fellow co-stars are dating as Melissa's socials especially Instagram is filled with the pictures of Norman Reedus. Even more, Norman celebrates Melissa McBride's 54th birthday ahead of season 10 on 23rd May 2019.

In the series, Melissa portrays the role of Carol Peletier (a meek housewife who overcomes domestic abuse to become a skilled, resourceful fighter capable of making tough decisions. Whereas her partner Reedus plays Daryl Dixon-the Group's primary hunter and a key member of the group and a trusted lieutenant.

She garnered a net worth of about $3 million as of 2019. Her primary source of income is a career as a TV and movie actress. She makes $35-$75 thousand per episode for starring in TV series and $50 thousand per movie.

Melissa Suzanne McBride was born on 23 May 1965 in Lexington, Kentucky.

She rose to prominence as Carol Peletier on the AMC series The Walking Dead.