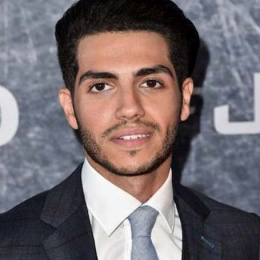 Mena Massoud lies upon one of those Canadian actors, who is loved in the acting business both for their looks and acting skills. He is famous for working in films like Ordinary Days, Run This Town, and Strange but True. He is also famous for working in the television series like The 99, King, Open Heart, and Watch Dogs 2. Massoud is on the road to Hollywood stardom as he's recently performed in the anticipated live-action reboot of "Aladdin".

Egyptian-Canadian actor is popular for romancing Naomi Scott's Jasmine in Disney's live-action series Alladin. Who is he dating in real?

Unlike Aladdin and Jasmine's affair, it's tough to guess to certain whether Massoud is single or in a relationship. Toronto, Ontario native prefers privacy when it comes to sharing his personal life.

Is Mena Massoud Dating Someone?

Mena Massoud is probably single as of now. The well-known Canadian actor is focused on his career and is believed to be out of dating life.

Massoud was last spotted with the Moroccan actress, Nisrin Erradi on 22 September 2019 congratulating her on winning International Artist in Motion Award for her performance in ADAM.

Moreover, he is never spotted with any women outside the reel life. the actor is out of any rumors and media controversies regarding both of his personal and professional life.

It seems like the actor is waiting for the love of his life as he shares no romantic life as of now. Additionally, he is an active person on social media and often shares posts regarding his daily personal and acting life.

What is the Net Worth of Mena Massoud? Know about his Salary, Earnings, Career

Reminiscing about the one year anniversary of @evolvingvegan

Mena started his acting career in the film industry working in the 2015 film named Let's Rap as John. Since then, he performed in a number of films like Ordinary Days, Run This Town and many more.

Besides, his recent film Aladdin premiered on 8 May 2019 in Grand Rex, Paris. Hollywood stars like Will Smith, Naomi Scott, and Nasim Pedrad.performed their best in the movie which is set to release in the U.S. on 24th May. More to that, the film was made with a budget of $183 million.

New #Aladdin poster! Hope everyone is getting as excited as I am after watching the film last night

The whole cast and crew member attended the LA premiere of their movie on 22 May 2019. While Massaoud (Aladdin) looked dapper at the event in a shimmery Givenchy suit, his co-star Scott opted for a pink ball gown with a long trail.

Take a look at the video of Mena Massoud & Naomi Scott interviewed by Will Smith;