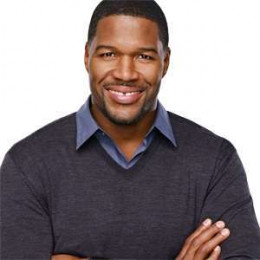 Michael Anthony Strahan is a former National Football League defensive end who played his entire career for the New York Giants. Michael was born as the youngest child to father Gene, a boxer with a 1-1 record against future heavyweight Ken Norton, and mother Louise Strahan, a basketball coach. He is the nephew of retired pro football player Arthur Strahan. After retiring from the NFL, Strahan became a media personality.

Michael Strahan is currently a football analyst on Fox NFL Sunday and also serves as co-host on the highly rated television morning talk show Live! with Kelly and Michael alongside Kelly Ripa. He starred in and produced the short-lived Fox sitcom "Brothers" and appeared as host for "Pros vs. Joes" alongside fellow Fox football analyst Jay Glazer. Strahan was formerly married to Wanda Hutchins and had two children together.  Later, they got separated and Strahan married Jean Muggli of North Dakota with whom he has twin daughters. After seven years, he married his third wife, Nicole Mitchell, and again got separated after five years.

Michael Strahan was married to Wanda Hutchins in Germany until 1996. They have two children together. He got separated after moving to the US.

Michael first met Jean Muggli of North Dakota at a Manhattan spa. They have twin daughters together.

In 2009, Michael got engaged to Nicole Mitchell, Eddie Murphy‘s ex-wife. In August 2014, the couple decided to quit the relationship.

Tanita is the first child and only daughter born to this couple when he was in Germany. She is cute with curly hair.

Michael is the first son and second child born in Germany. He later moved to the United States with his father.

Sophia is one among the twins born with Jean. Her parents got separated after three years of her birth.

Isabella is the next daughter born to the couple in the year 2004. She is one among the twins and looks adorable in the pictures.