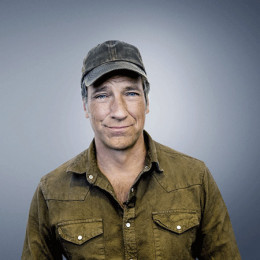 Mike Rowe is a renowned television host and actor, narrator and a former opera singer best known for his appearance in the popular Discovery Channel series Dirty Jobs. He has also worked as a pitchman and in commercials for Ford Motor Company.

Is Mike Rowe still Single or in a Relationship?

Mike Rowe is currently dating his long-term girlfriend Sandy Dotson who is an executive at a data-management company. Rowe and Dotson officially announced their relationship after the two were captured enjoying the vacation.

Currently, Mike and Sandy are living a blissful life in California despite not having any kids. There are fewer signs of disputes regarding their breakups and an extramarital affair.

Speaking of expanding family members, Rowe doesn't feel the need to have children. During an interview in 2006, Mike explained the pros and cons of parenthood considering his friends as an example.

American Dad! the narrator once stated his reasoning for not having kids is the cause of the fact that he's selfish. Even if he ever changes his mind and decides to have a family, his reasoning would be the same.

Prior to his relationship with the alleged girlfriend Sandy, Mike was romantically involved with an actress Danielle Burgio. However, the couple couldn't handle their relationship and split apart.

Mike later moved on with Sandy, after his and Burgio's did not work out. At present, Danielle Burgio, an American stuntwoman has now tied a knot to producer Robert Merrill.

Mike has earned an impressive net worth from his career as she succeeds to maintain the net worth of $35 million. Despite that, he gets an amazing salary for his contribution to television. He receives an annual salary of $10 million at present.

As a philanthropist, the 57-year-old media personality gives some portion of his income in charities and non-profit organizations as well. For instance, Mike Rowe is also CEO of the "Mike Rowe Work Foundation" that awards trade school scholarships to those wishing to pursue a trade.

Rowe began his television career as a host On-Air TV for American Airlines. In the early 1990s, he hosted the CD-ROM music trivia game Radio Active and in 2002, he hosted Worst Case Scenarios for TBS.

Mike joined Discover Channel and his first work with them included a trip to the Valley of the Golden Mummies. He is the narrator for National Geographic Channel’s series Wicked Tuna.

Rowe has done plenty for them like in Southern Steel, Mystery Diagnosis, Airplane Repo, Ghost Hunters, and many others. He is a gun owner and a supporter of the U.S. 2nd Amendment; however, he's not a member of the National Rifle Association or any similar group.

According to him, his show Dirty show is in tribute to his father and grandfather. In 1990, he started his career in broadcasting as an on-air host for the shop at home TV channel QVC. He has hosted popular programs like Worst Case Scenarios for TBS, The Most for The History Channel, Evening Magazine on KPIX-TV in San Francisco, etc.

He is best known for his work on the Discovery Channel series Dirty Jobs and the CNN series Somebody's Gotta Do It.

Mike Rowe was born as Michael Gregory Rowe on March 18, 1962, in Baltimore, Maryland to John and  Peggy Rowe. The handsome and charming TV star holds an American nationality and is white by ethnicity.

Mike joined Overlea High School and completed his higher studies. Later he attends the Essex Community College where he sang with the Chorus of Chesapeake.

During his early days,  he attended Kenwood Presbyterian Church in Baltimore. He earned graduation from Towson University with a degree majoring in communication studies. Later he became a professional singer and sang with the Baltimore Opera.