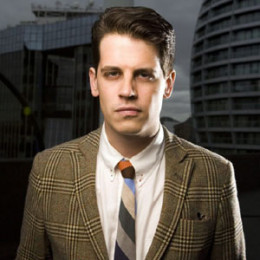 Milo Yiannopoulos is a British political commentator, journalist, and author who garnered quite an attention due to his opinion and association with alt-right.

Milo Yiannopoulos was born Milo Hanrahan on 18 October 1984 in Kent, England. When he was only six his parents divorced, and he was raised by his mother and stepfather. He adopted the surname of his grandmother with whom he spent most of his teenage days.

Yiannopoulos attended Simon Langton Grammer School for Boys in Kent and later expelled from the school. Even though he attended two Universities, the University of Manchester and Wolfson College, Cambridge, he never completed his degree.

Milo developed the interest in technology journalism after examining the subject women in computing for The Daily Telegraph in 2009. Prior to that, he had an interest in the field of theatre criticism. He organized The Telegraph Tech Start-Up 100 in 2011. It ranked the most promising technology start-ups in Europe. The same year he founded Wrong Agency his events company along with his friend David Rosenberg. The company faced a huge loss and soon got dissolved.

In November 2011, Yiannopoulos along with his friends launched the online magazine The Kernel which was supposed to fix European technology journalism. The Kernel was sued by two of its contributors in 2012 for failing to pay thousands of pounds owed to them.He was then appointed the editor in chief by BERLIN42 in March 2013.

Milo later served as an advisor for Daily Dot Media in 2014. Meanwhile, he featured on the show Newsnight debating with stars like Will Young, Tinchy Stryder, and Boy George. He is one of the early journalists who covered the Gamergate controversy. He published GameJournopros regarding the ongoing Gamergate controversy.

In 2015 Yiannopoulos joined Breitbart. There his opinion about alt-right got quite an attention. He also gave his vocal support in Donald Trump’s presidential candidature. He got completely banned from Twitter in 2016 for inciting or engaging in the targeted abuse or harassment of others.

He departed from Breitbart in 2017 after a controversy that arose from his saying sexual relationships between 13-year-old boys and adult men and women can be "perfectly consensual" and positive experiences for the boys in a video clip.

Besides that, he is also a writer and wrote a couple of poetry books under the pseudonym, Milo Andreas Wagner. He wrote introductions for the Forbidden Thoughts, the 2017 science fiction compilation and Always Lie: Taking Down the Thought Police.

On 26 May 2017, he made an announcement regarding an auto biography entitled Dangerous to be self-published on 4th July 2017. The book became the best-selling political humor book on Amazon and a New York Times, Wall Street Journal and USA Today bestseller.

Milo is openly a gay. He in an interview said that he is in a romantic relationship with an African- American. He did not share the details of his boyfriend but did say they were happy with each other.

As a journalist and entrepreneur, Milo has accumulated an estimated net worth of $4 million.