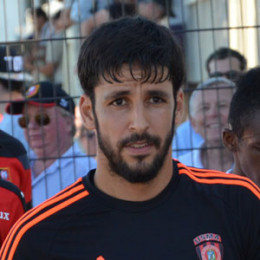 An Algerian professional footballer, playing as a goalkeeper, Mohamed Lamine, is currently playing in the club USM Alger in the Algerian Ligue Professionnelle 1 since 2011 and in the Algerian national team since 2010. He can be seen wearing jersey number 1. He started his youth career in 2001 joining at Lycee Sportif de Draria but later moved to USM Alger in 2002 from where he made his professional debut. After spending 5 years at USM Alger, he moved to MC Alger but again joined it in 2011.

There is no information available on his relationship status. It is not known whether he is married or is in a relationship and has a girlfriend or is single. He has remained discreet and avoids public attention in his private life.

He loves his privacy and keeps his personal life out of professional. There are no rumors on him related to women. He is rumored during the transfer season on his transfer.

Mohamed Lamine Zemmamouche was born on 19 March 1985 in Mila, Algeria.