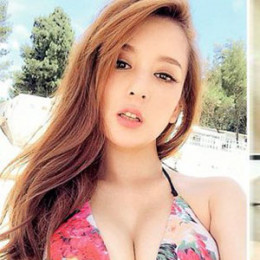 Moka Fang is one of the gorgeous women in all of Hong Kong. She is very active on Instagram and has over 20 thousand followers. Despite being so famous, there is not much information to be found about her. There is no detail on her childhood, or her father or mother or her siblings. She seems to keep her personal life away from limelight and media.

Moka Fang Married? Who's Her Husband

Moka is a married woman. She tied the knot with Aaron Kwok on April 18, 2017, at the Peninsula Hotel. The ceremony was low-key including only families and close friends of the bride and groom.

The couple started dating in mid-2015 when the singer was spotted holding her hands while they were in his car. The couple took their time to understand each other before getting hitched. It is said that Aaron proposed to her on a Ferris wheel while they were on a holiday in 2016. 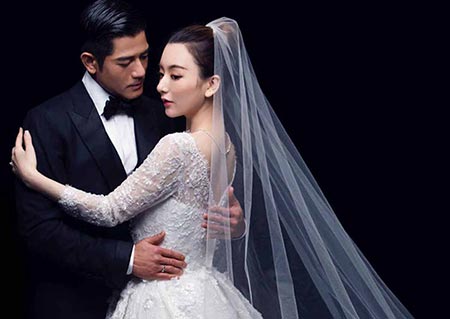 Before Aaron, Fang revealed in the matchmaking variety show that she had been in six relationships in the past.

Moka Fang is mother to two adorable kids. The couple's first child, a daughter Chant Kwok was born in 2017 exactly five months later the two married. They celebrated her first birthday with a lavish fairytale-themed party at Disneyland Hong Kong on 2nd September 2018.

The couple is expecting their second child together. The blessed pair revealed the happy news in September 2018. Fang and her husband Kwok welcomed the second daughter on 18th April 2019. The proud father shared the first glimpse of their daughter writing,

"Today, I am very happy as it’s a very special day. I would like to share the good news."

"Chantelle (his daughter) now has a sister, our second treasure is healthy, and mummy worked hard. As of today, we will happily (be) a family of four."

The family of four is living a happy and prosperous life without any rumors of divorce and extramarital affairs.

The Chinese beauty, Moka Fang's socials is showered with a lot of pictures of her modeling and her travels which shows that she is living a luxurious life.

Leaving out the rest she also earns from her modeling and acting career, so she probably must have a huge net worth. Moka generates $35-$100 per photoshoot.

Fang's partner Aaron Kwok worked at a jewelry store chain. His father established a successful gold retail business, and it was Aaron's intention to learn the business prior to taking over his dad's company. During the tenure, Kwok has bought and raced a number of vehicles.

Fang's spouse, Aaron Kwok bought her a mansion in Shanghai for HK $30million as a wedding gift. He has an estimated net worth of about $20 million at present. Aaron brings in thick revenues through his career as a singer, dancer, and actor.

Fang first rose to fame in China in 2012 when she appeared on a matchmaking variety show In the show introduced herself as an accountant from Shangai.

That year she also published a book called Shining Moka which contained many revealing pictures. She then appeared in an online series called Girls Apartment about the life of four young urban women based loosely on Sex and the City. Later on, she joined a group of female DJs called the Voodoo girls.

Speaking of her husband, Aaron is one of the Four Heavenly Kings of Hong Kong and is famous for his music and dance. He was considered one of the most eligible bachelors of Asia before settling down with Fang.

Moka Fang was born on 6 July 1987 in Nanling County, Wuhu, China.  There is no information about her childhood or her family. The starlet came to limelight in December 2015, when Aaron Kwok, a Hong Kong singer, dancer and actor announced their relationship on Weibo, China's version of Twitter.

Moka is a married woman. She tied the knot with Aaron Kwok on April 18, 2017, at the Peninsula Hotel. The ceremony was a low key including only families and close friends of the bride and groom.