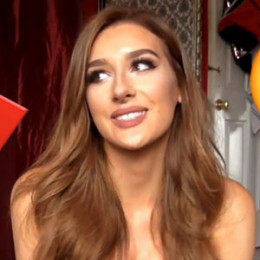 Molly Eskam is an American model and internet personality who runs vlog channel on Youtube, also well-known for her appearance as a swimsuit and lingerie model.

Molly Eskam was born on 29 September 1998 in Scottsbluff, NE. When she was a child, she moved to California and lived in Carlsbad.

Molly was born to Kent and Laurie, and also has two brothers Chace and Chance.

She came into limelight, after appearing on swimwear and lingerie advertisement in television and magazines. She has also walked the runway at events like the Courtney Allegra Runway Show.

Moreover, she also has a self-titled YouTube channel where she has about 264k subscribers and has collaborated in videos with YouTube star RiceGum.

Regarding her personal life, Molly is possibly dating FaZe Rug, as they posted many collaborative videos which sparked a rumor that Rug is her boyfriend.

Further, the chemistry the pair share with each other hints that they are more than just friends.

Summer 2018 who watched our dry ice video? What are the thoughts on it

However, both of Rug and Eskam have kept quiet regarding their relationship.

Though Eskam is yet to speak about her current dating life and relationship, she stated via a Twitter post that she has a 'loyal boyfriend' ever. Have a look:

Yeah i have the royal bf ever

Well, details about her current boyfriend is still a mystery.

Molly Eskam earns a decent amount of money from her successful career as a model and from her vlogs on Youtube. She has a total of nine million views on her channel.

Her total net worth is estimated to be in million dollars.