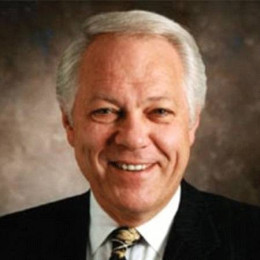 An author and former broadcast journalist from Detroit Mort Crim who provided the inspiration for Will Ferrell's character Ron Burgundy in the series of films named "Anchorman". He was also an anchor of WHAS-TV in Louisville, WBBM-TV in Chicago and KYW-TV in Philadelphia. He is the founder of Mort Crim Communications, Inc which is an integrated marketing agency in the Detroit area. He is currently working at Majic Windows Company. In 2009, he was inducted in Hall of fame by The Broadcast Pioneers of Philadelphia. In 1997, he retired from anchoring from WDIV-TV Detroit.

He was in headlines when he disclosed that he was diagnosed with colon cancer. Talking about his personal life, he is already married.

Though he has not disclosed her name yet we can see her picture along with him while the couple was invited to the party organized by President George H. Bush and his wife Barbara. He has not publicized any information regarding his children.

Mort Crim was born on 31 July 1935 in Philadelphia, Pennsylvania. Previously, he worked on KYW-TV, WBBM-TV, and WHAS-TV.

During a 2013 interview, actor/comedian Will Ferrell mentioned that Crim is the main source of inspiration for his role as TV news anchor Ron Burgundy.