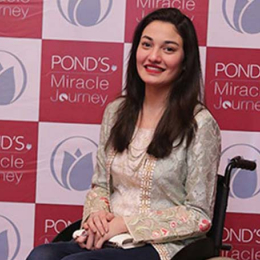 Muniba Mazari is one of the most respected and praised Pakistani artist, activist, a motivational speaker. She is known for her struggle in early life and her path to grab the opportunities for fame by learning from her past. She is also famous as the National Ambassador for UN Women Pakistan.

The 32-years-old motivation speaker is also famous for working as a first-ever wheelchaired-model with the famous British chained hair salon brand Toni & Guy. She was featured in Forbes 30 under 30 in 2016 and lies upon one of those two Pakistanis who is named among BBCs 100 most inspirational women in 2016.

Personal life of Muniba Mazari; Is she Married?

Muniba Mazari is unmarried and possibly single at the moment. The well-known Pakistani activist is focused on her career and is never spotted dating with any men.

Muniba was previously married to the former air force official and now a commercial pilot Khurram Shahzad in 2005. The pair stayed together for nearly a decade but they never shared a happy bond. In a speech program Muniba said;

"I was 18 years old when I got married. I belong to a very conservative family, a Baloch family where good daughters never say no to their parents. My father wanted me to get married, and all I said was, if that makes you happy, I will say yes! and of course, it was never a happy marriage."

The couple separated in 2015 when Muniba decided to leave the house and overcome all her fears.

The PTC anchor is a proud mother of her son Nile whom she adopted in the early time of his childhood. After getting into the accident, she was told by the doctors that she won't be able to be a mother ever again. She once said;

"I realized that there are so many children in the world, All they want is acceptance. So there is no point of crying, just go and adopt one, and that's what I did."

Former husband of Muniba sued against her for $70,609 (10 million PKR) in December 2017. He accused his wife of defaming him and revealing facts about their marital relationship.

The duo was living their life peacefully but things went wrong when they faced a car accident near Jalalabad on 27th February 2008. The duo fell into a ditch along with the car as the diver slept while driving the car. The driver was himself Khurram who managed to jump from the car and save his life.

What is the Net Worth of Muniba Mazari?

Muniba is currently working as the National Ambassador for UN Women Pakistan. On the other hand, she worked in many motivational speaking campaigns, starting by working in TEDx Islamabad.

Mazari is also a famous wheel-chaired model and has worked in various modeling projects. In fact, she is the first ever wheelchair-using model who works in the famous British hairdressing salon named Toni & Guy. Besides, she also works as an anchor at the Pakistan Television Corporation(PTC). Considering her work, she was named in one of BBCs 100 most inspirational women in 2015.

Muniba Mazari was born on 3 March 1987 in Pakistan under the birth sign of Pisces. She holds Pakistani nationality. Moreover, she is a private person and does not share much about her personal life in front of the media.

When it comes to giving the size of your wallet doesn’t matter, the size of your audience doesn’t matter. The only thing that matters is the size of your heart and how pure your intention is! We came in the world with nothing, and we’ll leave with nothing but what we do in between is what makes all the difference. See you all tonight! Insha Allah Unn Ke Liye! @tabbishmahmood @itsarchie4u A project that involves "Music for Cause". We have our first event planned in Islamabad. This evening will be “Allah Rakhe Ke Liye!” Everyone is requested to pay an entry fee of Rs: 200/- on the entrance. At the event Rakha’s inspiring story will be shared and with the amount collected, we plan to get him a new manual wheelchair and rest of the amount will be given to him for his balloons’ business. Performers: Meet our talented performers for the evening who are helping us for this cause: @mariaunera @rizwananwarmusic @fmguruz @bakshibrothers Date: 2nd of February, 2019 (Saturday) Time: 7:00pm Sharp Venue: Sattar Baksh Cafe, Islamabad. NOTE: This event will not be having any commercial activity. We cannot sell or promote any product during the event; it will purely be for charity. Looking forward to seeing you all!

Muniba is an active person on social media and shares many posts regarding her personal life and professional life. Furthermore, she garnered over 981k+ followers on Instagram and over 499k+ followers on Facebook.

Muniba was previously married to the former air force official and now a commercial pilot Khurram Shahzad in 2005. The pair stayed together for nearly a decade but they never shared a happy bond.

The PTC anchor, Muniba Mazari is a proud mother of her son Nile whom she adopted in the early time of his childhood.