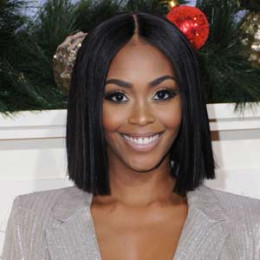 American actress, Nafessa Williams is best recognized for playing the characters Nicole Gordon in the Meek Mill film Streets, Deanna Forbes in One Life to Live and Dr. Charlotte Piel in Code Black. Williams is single at present.

Born on December 4, 1989, in Philadelphia, Pennsylvania, Nafessa Williams is American by nationality and is of Afro-American ethnicity.

She attended the West Chester University of Pennsylvania, studying criminal justice. She also interned in District Attorney's Office in the homicide unit.

Nafessa Williams made her acting debut in 2011 from the feature film Streets playing the character Nicole Gordon. The same year Williams appeared in TV series One Life to Live, played the role of Deanna Forbes in 33 episodes.

Over the years she did minor roles in many series and feature film including The Dirty 30, Whitney, Real Husbands of Hollywood, True to the Game and Code Black among others.

In 2017, she portrayed the character Jade in the Showtime series Twin Peaks. She also did one episode playing Jenny in the drama anthology series Tales.

As of 2018, she appears as a regular cast Anissa Pierce in the superhero series Black Lightning starring Cress Williams.

Nafessa Williams is possibly single at present. She has not introduced anyone as her boyfriend nor hinted being in a relationship via social media.

But, she had a boyfriend in the past. In a tweet, she made in August 2009, Williams wrote that she loved her boyfriend, but as of now they seem to have broken up or maybe she is just keeping her relationship low key.

She is very active on Twitter and Instagram with around 30k  and 290k followers respectively. Williams is a fitness freak and love working out. Through her Instagram, she has started a petition to stop migrants from becoming slaves in Libya.

Nafessa Williams probably has a net worth of six-figure; however, the official amount is not public yet.

Williams was part of One Life to Live and did 33 episodes for the show. According to the sources, stars who have been part of soap opera for a year on an average earn $20,000-$156,000. She also must have been paid a salary somewhere around that mark.

As of now, Williams is cast as a regular in the superhero series Black Lightning which will surely boost her net worth in the coming future.