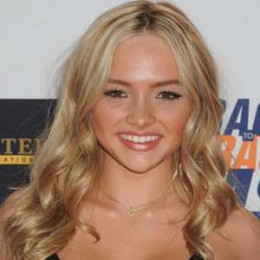 Natalie Alyn Lind was born on 21 June 1999 in the United States. She is the eldest daughter of actress Barbara Alyn Woods and producer John Lind.

She has two sisters Alyvia Alyn Lind and Emily Alyn Lind. Both of her sisters are American actresses.

Natalie Alyn Lind's father is a producer who has made the film based on LA. Natalie Alyn Lind has worked in many films as leading roles such as Army Wives, Wizards of Waverly Place as soon on.

She has also played in a crime drama film called “Gotham”. Natalie Alyn Lind is a scripts writer. Natalie Alyn Lind and her family fund the charity program called Make-A-Wish Foundation. She is also known for her role in The Gifted, Chicago Fire, iZombie, and Murder in the First.

After breaking up with former boyfriend actor Aramis Knight, she has a new man in her life.

Back in 2017, she uploaded a couple of images with her rumored boyfriend via Instagram. While the two created media headlines the year, details about the man is still a mystery.

She has not revealed a bit of information about the guy and has not posted images with him in 2019.