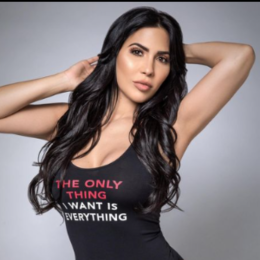 Natalie Guercio is an American reality television personality and entrepreneur best known for being a cast member VH1 series Mob Wives. Ms. Guercio appeared in seasons four and five of Mob Wives. Amidst her time on the show, Natalie fought and argued with her co-stars.

Who is Natalie Guercio's Boyfriend? Does She Have a Husband?

Natalie Guercio has never been married or engaged in life. The reality star considers London Renee her boyfriend and most likely her future husband. She met London Renee in 2008 at a Trump Plaza Beach Bar in Atlantic City. 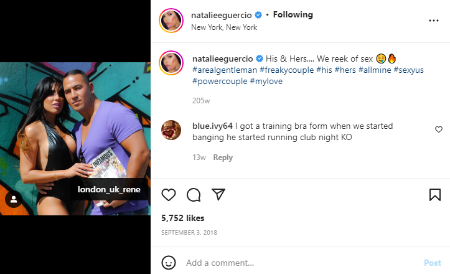 The pair immediately started dating from the day they fell for each other. Natalie-London duo has been together for over fifteen years. Guercio is a Capricorn, and Rene is Libra.

London Renee goes by "london_uk-Rene" on Instagram with 14.1k followers. Natalie has not mentioned she had allegedly been in romantic affairs before London Renee. However, a big question today is who Nunzio Gianni's real dad is.

Natalie is a proud mother to a son Nunzio Gianni. The Mob Wives cast gave birth to a son on March 6, 2004. Natalie's eighteen-year-old son is still young. He studies at a local high school in the United States. 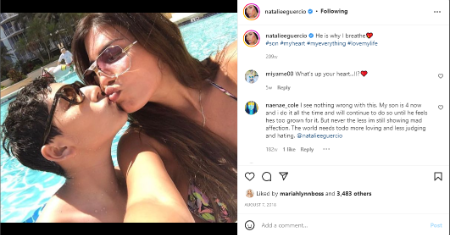 In the meantime, the mother-son duo spends quality time together; they go swimming, parties, and on vacations.

London Renee Was Gassed at a Club

The boyfriend of Mob Wife, Natalie Guercio, was slashed in the face while enjoying partying at a hipster dance club. The incident took place in Brooklyn Saturday night, December 29, 2014. More than ten people began fighting in the middle of the party.

A huge fight occurred at the Mob Wives premiere party in New York City that night with broken bones, flying bottles, and police. The war began when Renee got into a verbal argument with another partygoer. Sources claimed that Renee received over 250 stitches. 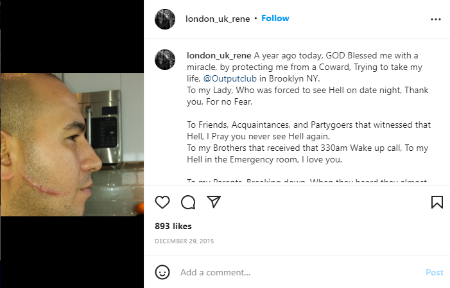 Natalie Guercio was slashed in the face at Mob Wives party. SOURCE: Instagram

Renee was also slashed on his arm and stomach by a known person at OUtput in Williamsburg. London Renee immediately went to Hackensack medical center to have a plastic surgeon stitch him. The actress later uploaded Renee's sedated and bandaged picture on Instagram.

Besides that, Guercio was involved in night-club serious trouble before, when she was caught kissing a man other than London Renee on camera. Radaronline shared an image of Natalie necking with the record producer in 2013.

Natalie Guercio possesses a net worth of $500,000 as of 2022. As a former Mob Wives regular, Natalie surely made a decent amount. Moreover, the lady likely bags a hefty paycheck from her career as a makeup artist and hairstylist. 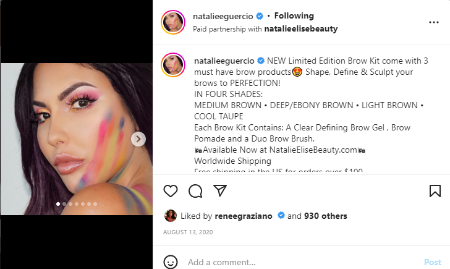 Guercio is also an entrepreneur and likes calling herself a cosmetologist and makeup artist. Ms. Guercio worked as the founder and face of "Natalieelisebeauty." London Renee's partner currently owns an online beauty shop, "hair on fleek."

She sells lipsticks and eyeshadows palettes through online cosmetic shipping, ranging from the lowest at $18.00 to the highest at $55.00. In 2014, Guercio released a song, "Delicious," which earned a million views on YouTube. The song implied her comment on Mob Wives when she said a man smelled delicious.

Natalie serves as a domestic violence advocate. She helps women get rid of an abusive relationship. Probably,  Guercio had seen or been through domestic abuse and violence in her life, which led her to raise her voice for women's rights.

The Guercio family generation has been running Carto Funeral Home since 1952. Natalie began managing her grandmom's business, the Carto Funeral Home in Philadelphia, in 2011. The Funeral home is famous among mobsters like Michael Ciancaglini, Anthony Pungitore and Frankie Baldino.

Check out the clip of Natalie Guercio on Mob Wives.

Mob Wives showcase the lives of four struggling "allegedly" associated ladies who have to follow their husbands or fathers in their mob-related activities. In 2018, Natalie was featured in Steve Stanultary's "Wasted Talent," a documentary. The show examines the struggles and temptations of young stars on their rise to fame.

In 2019, Guercio appeared in 18 minutes short comedic film of Turkey's Done. The movie is based on Peaches Bracco, a South Philly housewife who waited for her cheating husband to return home for thanksgiving. Natalie Guercio's other television credits include her appearance in Clinton Road and the Neighborhood as Dana.

Natalie Guercio did not appear in Mob Wives from the sixth season of mob wives. She was accused of her inappropriate behavior in the previous season. For this very reason, Karen Gravano called Guercio, a racist.

Guercio was dragged into controversies following a rough life in mob wives' seasons. Natalie suffered from a meth addiction that pushed her to fame. The diva took Crystal Meth to help herself from depression. The media also mentioned that Guercio dated a married man.

Guercio has a younger brother Paul Guercio, who is an author by profession. Natalie is of Italian descent.

Natalie is a non-vegetarian. The reality star does gym and exercises to stay fit. The Mob Wives star has a pair of dark brown eyes and wavy long brown hair.

Natalie Guercio has 2.6k followers on her Facebook account and 274k on Instagram. The reality star prefers keeping in touch with her fans via social media. Guercio uploads her daily life activities on social media, and she especially flaunts her toned bikini body on Instagram.

Nunzio Gianni Gianni was born in March 2004 to Natalie Guercio and her ex-partner, Nunzio does not have siblings.