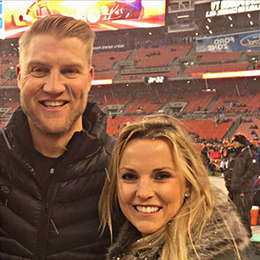 Natalie McCown is a celebrity wife who rose to fame after she started dating a famous American football player, Josh McCown. The proud parents of four are together for years and are still free from any kinds of divorce rumors.

Natalie McCown is happily married. She is currently living a blissful life with her husband and her four adorable children.

McCown tied the knot to her boyfriend turned husband, Josh McCown. They are very private when it comes to their privacy, so has kept all the information regarding their marriage to themselves. When it comes to her spouse Josh, he is an American football quarterback who recently signed a contract with the Philadelphia Eagles of the National Football League. 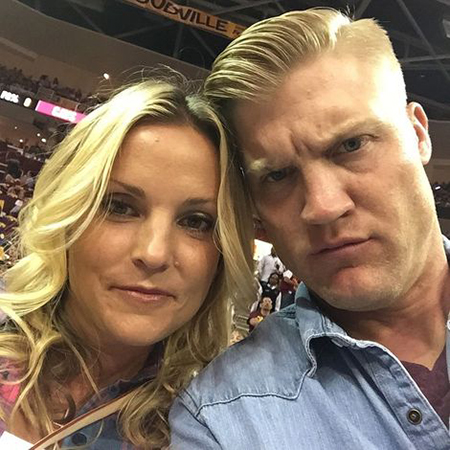 Natalie McCown and Josh McCown are together at an event.
SOURCE: Instagram

Well, the now husband-wife couple met while they were studying at the university. Eventually, they started dating and finally got married.

The couple moreover shares four children, two sons, and two daughters. Their two sons are Aiden McCown and Owen McCown. Similarly, their two daughters are Aubrey McCown and Bridget McCown. Their kid Bridget turned 21 as of 2019.

Happy Easter ! Always a special Sunday. Great having the whole fam together this weekend.

All of the kids are the great admirer of their father. In 2016, her daughter, along with her friends wore 7 of his football jerseys during the even at school.

When your daughter has jersey day at school and she doesn't have enough friends to wear all the teams #2missing pic.twitter.com/KJ7jN6jN8d

The pair further are together for years and still shares a great bonding. Till the date, they are free from any kinds of divorce rumors.

Like many celebrity wives, including Veronica Montelongo, Natalie McCown also shares a great net worth with her husband. Her husband earns an impressive net worth and salary from his career as a football player.

McCown shares the net worth of $18.8 million with her spouse. The star recently signed a  one-year deal with the Philadelphia Eagles for $2 million fully guaranteed and could be worth up to $5.4 million.

It has been an honor to journey through this wonderful game as a player for the past 17 years and I’m humbled to have the opportunity to serve the game in a new capacity. Link in bio

Apart, the star owns a house in Marvin, North Carolina. In2 017, he listed his  Waxhaw, North Carolina's house for $1.2 million. He along with the family, moved to Waxhaw's home during the 2017 offseason.

Natalie McCown has a great height and physique, which goes well with her personality. Her height is around 5 feet 2 inches whereas her spouse's height is around 6 feet 4 inches. Similarly, she might be in her late 30s.

Natalie McCown is married to Josh McCown. Her spouse Josh is an American football player who signed a contract with Philadelphia Eagles in 2019.

Bridget McCown is the first child of Natalie McCown and Josh McCown. She was born on August 1998.

Owen McCown is the second child of Natalie McCown and Josh McCown. He is the first son of the couple. He was born in February 2003.

The second son and third kid of Natalie McCown and Josh McCown is Aiden McCown. He is 11 months younger than Owen. He was born in January 2004.

The last child of Natalie McCown and Josh McCown is their adorable daughter Aubrey McCown. He is youngest among their four children.