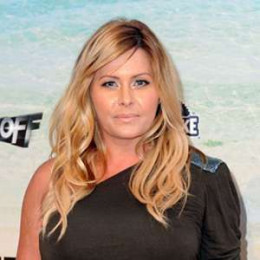 Actress Nicole Eggert is best known for her role as lifeguard Summer Quinn on Baywatch. The star worked in numbers of movies and TV series from where she is making an amazing net worth. Along with a hardworking actress, she is also a caring mother.

Nicole Eggert is neither married not dating anyone as of 2019. She is spending quality time with her kids and also focused on her career rather than having a romantic affair again.

The blonde beauty might be possibly single after numbers of failed relationships. The Baywatch star met her partner, Corey while both of them were struggling to get into the Hollywood industry. The pair were around 14 years old while they expressed feelings to one another.

Eggert was once engaged to Canadian actor Corey Haim, whom she worked within a couple of films. Sadly, the relationship could not last long due to Corey's drug addiction. Unfortunately, in 2010, Corey died from pneumonia.

In early 2002, Eggert was married to an actor, Justin Herwick and started to live happily as husband and wife. But their relationship was short-lived and divorced in the fall of 2002. Moreover, Eggert has two daughters named Keegan Eggert and Dilyn Herwick.

What is Nicole Eggert Net Worth?

Nicole Eggert has a net worth of around $1 million. She makes the fortune from her acting career. Till the date, she worked in a number of movies and TV series from where she certainly collected huge bucks.

Nicole Eggert was born on 13th January 1972 in the United States. Her father, Rolf Eggert is a German-born executive of a canning company and her mother Gina is a British-born talent agent.

Eggert was only 5 years old when her mother enrolled her in the petite division of the Miss Universe beauty contest. Later, she won first place, launching a career as a child actress that led to several television commercials, including spots for Johnson's Baby Shampoo.

When it comes to her career, she is recognized for her work in Charles in Charge where she portrayed Jamie Powell. Additionally, she also worked in Baywatch as Summer Quinn. She also presented a short role in Boy Meets World in the year 1999 and appeared in several Christmas movies, where she portrayed her roles with excellence. She also a participant in VH1 reality shows Celebrity Fit Club, where she experienced an amazing journey.

From 2002 to 2002, Eggert was married to her long time boyfriend Justin Herwick. With whom she shared one daughter named Dylin Herwick.

Eggert gave birth to her first child Dylin; the child's father is Justin Herwick. Not much information is made available on her.

Keegan is the second daughter of Eggert; she was born on 29 July 2011. The child's father is her ex-boyfriend.