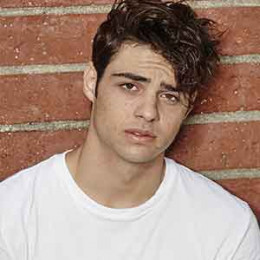 Born and raised in Miami, Florida, Noah Centineo is a rising Hollywood star. He is best known for his role Peter, one of Lara Jean's love letter recipients in popular Netflix series, To All the Boys I've Loved Before in 2018. Some of his series are The Fosters, How to Build a Better Boy, The Stand-In, [email protected] are thoroughly popular among audiences.

Noah Centineo was born on May 9, 1996, in Miami, Florida to Kellee Janel and Gregory Vincent Centineo, a businessman and executive producer, Legends of Oz: Dorothy's Return. He was raised in Boynton Beach, Florida along with his eldest sister, Taylor Centineo. He is of Italian and German descent.

Centineo attended BAK Middle School of the Arts for his elementary education. Then he joined Boca Raton Community High School for the ninth and tenth grade, where he used to play soccer. In 2012, he left Boca Raton in order to move to Los Angeles.

Noah Centineo started his acting career in 2009 in the family film The Gold Retrievers as the main lead, Josh Peters. Then he debuted in TV in the Disney Channel sitcoms Austin & Ally in a small role and also appeared in an episode of Marvin Marvin and Shake It Up. He got his major break in 2014 Disney Channel Original Movie, How to Build a Better Boy. The movie was immensely popular among teenagers.

The following year, Centineo starred in Jesus Adams Foster in Freeform's drama series The Fosters and made his first appearance in 3rd season episode "Lucky" which aired on August 17, 2015. He received Teen Choice Awards nomination in 2017 in the category of 'Choice Summer TV Star: Male'.

Noah Centineo appeared in go90's teen drama-thriller series [email protected] in 2017 where he played the role of Hawk. The same year, he featured in Camila Cabello superhit song, Havana as her love interest.

In 2018, he starred in two  Netflix original teen comedy films. He played the role of Peter, one of Lara Jean's love letter recipients in To All the Boys I've Loved Before opposite Lana Conder and the male lead in Sierra Burgess Is a Loser. Centineo will be seen in the 2019 romance film, The Stand-In in the lead role of Brooks Rattigan.

Noah Centineo is one of the rising Hollywood stars, he gained a massive popularity in short span of his acting career. He earned $150-$250k from his appearances in TV series, he also made a good sum from movies as well. Considering, his career growth his net worth isn't less than six digit figure.

Noah Centineo is possibly single at the moment but previously he dated several ladies from TV world. He first dated Lab Rats actress Kelli Berglund in 2013 but the couple split apart after some time. Then he was in a romantic relationship with Angeline Appel in 2016. But same as his previous relationship this one also ended on a sad note.

Noah Centineo and Angeline Appel at the pool,
Source: Heightline

Centineo found his love interest in popular Instagrammer Lauren Kolodin in 2016 but this one also couldn't work out and they broke up. As of now, he is focusing on his career building and exploring new ventures. He is quite popular on Instagram where he has 12.8million+ followers and after appearing in the movie To All The Boys I've Loved Before, he gained roughly 1 million followers in just 24 hours.

He is immensely popular especially among girls, even celebrity also has a crush on him. TV actress, Kiernan Shipka proposed him for marriage on her Instagram post. He has a scar on his face after being attacked by a dog at the age of 6. His first pet was a rabbit named Princess.

Noah Centineo on Jimmy Kimmel show, check out the video,