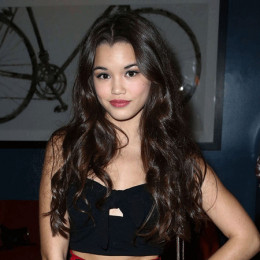 Paris Berelc is an actress and model, well known for her role in the Disney XD series "Mighty Med" as Skylar Storm. In the year 2013, she started acting professionally and at that time she was just 14 years old. She was the cover of "American Girl magazine" for their November/December Issue of 2009. At the age of 5, she got involved in gymnasium and since then she has won several competitions and championships.

She is a gorgeous and talented teen actress in the Hollywood industry, so lots of guys fall for her in just a matter of second. She is often romantically linked with some actors, but she hasn't spoke publicly about her relationship status. She lives in California with her family.

Paris Berelc and her boyfriend Jack Griffo
The above image captioned,

Happy Birthday, bubbs. Thank you for being a wonderful partner, an amazing friend, and a beautiful human being. I love you, double scoop

Paris Berelc was born on 29 December 2000. She is best known among her fans playing the role of Skylar Storm in the Disney XD TV series Mighty Med and Lab Rats: Elite Force.

Also, she appeared as Alexa in the Netflix TV series Alexa & Katie.