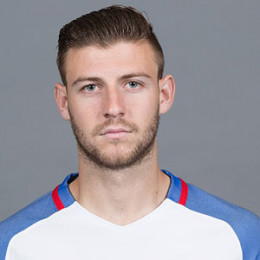 Professional soccer player Paul Joseph Arriola Hendricks, better known as Paul Arriola, plays as a midfielder. He plays for Major League Soccer club D.C. United and the United States national team. Currently, he is dating Anna Paola Bustamante and recently got engaged in July 2017 and soon to get married.

Paul Arriola was born on 5th February 1995, in Chula Vista, California, a suburb of San Diego. He is the son of Dawn and Art Arriola. He comes from Mexican descent.

He attended Matar Dei Catholic High School in Chula Vista, California. He was interested in soccer from early days, so later, he joined U.S. Soccer Development Academy Club Arsenal FC in the initial phase of his career.

U.S. Soccer Development Academy club has produced several successful players including Carlos Bocanegra and Hector Jimenez. Later, he joined the Academy of the Los Angeles Galaxy in 2013 and was transferred to Tijuana of Liga Max Club.

During the period, Paul was the part of a string of America-born players to join the Xolos along with Edgar Castillo, Edgar Castillo, Joe Corona and Greg Garza. He made debut for the club in a friendly match against Club America at Petco Park in San Diego on 6th July 2013.

He also played different league including 2013-2014 Liga MX season and CONCACAF Champions League. On 9th August 2017, he signed to Major League Soccer from D.C. United for a club record fee of $3,000,000 including allocation money for his rights to LA Galaxy.

Now, he is in the squad for the Gold Cup 2017 and has shared the pitch with Jozy Altidore and Omar Gonzalez. Finally, he got an opportunity to play for the senior side Puerto Rico and scored his first international goal and also assisted on Bobby Wood's goal on 22nd May 2016.

Paul was dating his longtime girlfriend, Ana Paola Bustamante, since 2013. Despite his busy schedules he somehow manages time for his love and visits several places on vacations and outings.

In July 2017, he proposed Ana which he announced via Twitter.

Paul is one of the rising soccer players who play for a top football club of America. He also actively participated in social sites like Instagram and Twitter, where he has over 14.7k fans on Twitter and over 20.4k followers on Instagram.

According to the sources, The D.C United gave him the annual contract with the amount of $1 million which means he has an estimated net worth in seven figure.