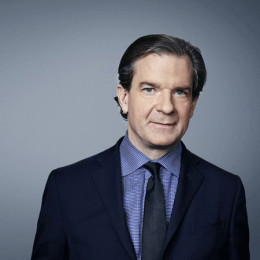 An American print and broadcast journalist, author and documentary producer Peter Bergen who is better known as national security analyst of CNN. He holds degree of Master of Arts in Modern History from New College, Oxford. In 1985, he started his career as a reporter at ABC News. In 1997, he became more famous after his first television interview with Osama Bin Laden which is marked as the first time when Osama had declared war against America. He is also the director of New America Foundation’s national security studies program in Washington D.C. He is an author of famous books like Holy War, Inc.: Inside the Secret World of Osama Bin Laden (2001) and The Osama Bin Laden I Know (2006) which became New York Times bestsellers.

Exploring his personal life he is a happily married man. He met his wife Tresha Mabile while he was studying at Oxford. Professionally, his wife is a documentary producer and writer.

Together they seem to be very perfect each other and till now there has been no news of any kind of conflict and divorce between them.

The couple is blessed with one son named Pierre Timothy Bergen. The family resides in Northwest Washington.

Bergen's net worth and salary is still under review. The average salary of a CNN journalist ranges from $67,545-$95,563.

Peter Bergen was born on 12 December 1962 in Minneapolis, Minnesota.

He is currently serving as CNN's national security analyst.

He wrote several books including Holy War, Inc.: Inside the Secret World of Osama bin Laden (2001), The Longest War: The Enduring Conflict between America and Al-Qaeda (2011), and  Manhunt: The Ten-Year Search for Bin Laden From 9/11 to Abbottabad (2012).

Professionally she is an astute Mideast observer and a documentary producer. They have already five years of their successful marriage relationship. She has given birth to a son.

He is the only son of the family. He is very healthy and an intelligent kid.