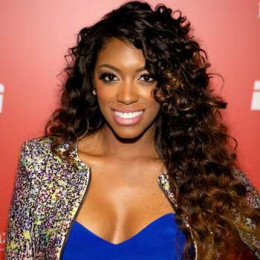 Porsha Williams is an American television personality, philanthropist, singer, and professional model, who came to prominence in 2012 after appearing in the fifth season of the reality television series The Real Housewives of Atlanta. As a singer, she launched her single "Flatline" in the year 2014, under the record label Kandi Koated Entertainment.

Williams went to Southwest Dekalb High School in Decatur, Georgia. She moved to Illinois to study business information technology at the American InterContinental University in Schaumburg.

Williams appeared in music videos in quest of a career in the modeling industry at her teen years. At 24, she opened a daycare facility given her parents’ careers. In 2005, William modeled for the Atlanta Dymes’ “pin-up” calendar.

On November 18, 2012, William debuted TV appearance on “The Real Housewives of Atlanta,” on its fifth season’s third episode after Bravo announced the new cast Williams and Kenya Moore in September 2012. Where she was shown, fighting over with Moore during a charity event.

In September 2015, Bravo reported that Porsha Williams had signed to be a full-time housewife once again, alongside newcomer actress Kim Fields. On January 28, 2016, it was announced that she is participating as a contestant on The New Celebrity Apprentice.

On March 17, 2014, Williams released her debut single “Flatline” via iTunes Store. Later that month, Williams got media attention after a squabble with Moore while taping the 6th season reunion for “The Real Housewives of Atlanta.”

Porsha Williams Vs Kenya Moore: The Real Housewives of Atlanta

Moore says that Williams was unfaithful during her marriage; after Williams called Moore a “slut from the ’90s” and Moore yelled that Williams was “a dumb ho” from a megaphone, Williams assaulted Moore. Moore later threatened to quit the series if Williams was to remain, remarking that “we’ve become angry with each other, we’ve threatened each other and gone to the edge. But at the end of the day, we know there’s a line.”

On the 2nd Feb. 2017, episode of "The Real Housewives of Atlanta," an epic confrontation between Kandi Burruss and Porsha Williams was highlighted. The two women barrage allegations against each other, including cases of lesbianism, cheating and sex dungeons.

Kenya Moore, who was once physically attacked by Porsha during a reunion show, blamed Porsha for lying about Kandi. Kenya likewise accused Porsha of being her copycat and says she stole her look. Kenya also uncovered that her friendship with Phaedra Parks has crumbled yet again. Moore also talked about Porsha's new boyfriend Todd Stewart

Porsha Dyanne Williams, known by her previous married name Porsha Stewart, is an American reality TV personality, singer, model, and actress. She got the media’s attention after she was hitched to football player Kordell Stewart in 2011. Their wedding ceremony was aired on the TV series “Platinum Weddings,” however, their marriage life was short-lived and divorce in 2013.

Well, Williams started dating footballer Kordell Stewart while she was working at the Lucky Lounge in Atlanta, Georgia. Around two years of marriage, Stewart petitioned for separation from Williams in March 2013. Their divorce was finalized in December 2013 and none of Kordell's property or profit through the settlement was handed to Williams.

Currently, Porsha was in a relationship with Todd Stewart. The two dated for months, but they previously dated in their twenties.

Stewart moreover has two children from his previous relationship, unlike Williams. Fameolous reportedly received texts message about Stewart from one of his children, Toren Stewart. The reported text blamed Todd for being abusive towards his children and ex-wife. However, Williams has said on RHOA that he is a good father.

After Williams divorced with Kordell, she started dating her now-boyfriend Dennis McKinley. In October 2018, the couple got engaged. The same year, the couple announced that they were expecting their first child.

I am happy, healthy... and pregnant! #BabyMckinley #DM #Blessed *Check out our full baby story in @People Magazine on newsstands Friday #TheMckinleys *Love you all thank you for your support and warm wishes it means the world to us!

Finally, in March 2019, Williams gave birth to her first child, a baby girl. Unfortunately, the couple called off their engagement soon after the birth of their child. Later in August 2019, they came back together.

Never knew I could hold my heart in my hands! I will love, protect and guide you with love all my days of my life! @pilarjhena @weelovephotography

On December 29, 2014, Williams was arrested for speeding with a suspended permit but was released the same day. Porsha Williams has an estimated net worth of around $500,000, which was only earned through television appearances.

Porsha Williams has the net worth of $16 million. She makes the amount from her career as a TV personality.

Williams moreover started appearing on “The Real Housewives of Atlanta,” since its 5th season in 2012. She began her musical career in 2014 and debuted her single “Flatline” under Kandi Koated Entertainment record label. In 2016, Williams took part in the 8th season of the reality competition show, The New Celebrity Apprentice. Currently, she stars on both Real Housewives of Atlanta and The New Celebrity Apprentice.

He is the first husband of Williams, who is a former American football quarterback who played eleven years in the National Football League.