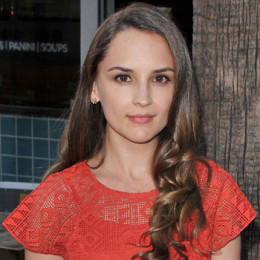 An actress, model, voice artist, and producer, Rachael Leigh Cook is well known for her role in the movie 'She's All That.' She played an FBI agent and co-starred with Will Truman Eric McCormack. Cook is best known for her film roles in Pussycats. She has featured in many episodes Titan Maximum and Robot Chicken.

Rachael Leigh Cook was born in Minneapolis, Minnesota on 4th October 1979. She is the daughter of Joann, a cooking instructor, and weaver, and Thomas H. Cook, a social worker, and former stand-up comedian, as well as a travel agent. Cook holds American nationality with white ethnicity.

Rachael began her career early, appearing in foster care adverts at the age of seven and doing print ads by ten. She debuted as an actress in the 1995 film 'The Baby-Sitters Club.'

Cook also worked as a main cast member in 'Into the West' the 2005 television miniseries produced by Steven Spielberg and DreamWorks.

Besides that, she also owns a production company, Ben's Sister Productions. Rachael has appeared in many episodes of the Seth Green comedies 'Titan Maximum' and 'Robot Chicken.'

In 2008, she guest-starred in an episode of the USA Network series 'Psych' as Abigail Lytar. In February 2010, Cook signed to play the female lead role in Fox TV's comedy pilot 'Nirvana.'

In 2011, she voiced in the MMO game, 'Star Wars: The Old Republic' in the character of Jaesa Willsaam.

On 2nd October 2012, she starred in the independent film 'Broken Kingdom,' directed by her husband, Daniel Gillies.

In 2011, Rachael Leigh Cook was selected by the Obama administration as a Champion of Change for Arts Education.

Cook before getting married, dated Vincent Kartheiser co-star in The Hairy Bird in 1998. Their affair lasted for four months and then broke up.

Cook till now has been nominated many times for Young Star Award, MTV Movie Awards, Choice Awards and so on.

Rachael has a net worth of $1.5 million dollars.

Her daughter Charlotte Easton Gillies was born in September 2013.