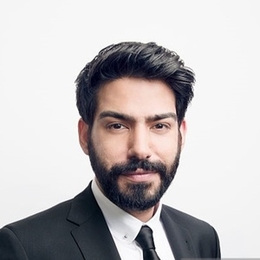 Rahul Kohli, a British actor of Indian ethnicity became best known as Owen Sharma on Netflix's The Haunting of Bly Manor. Kohli was also a part of other popular Tv series including iZombie. But, is Kohli dating anyone?

Well, not only is actor Rahul Kohli dating somebody, the handsome man is perhaps engaged too. But, who is the lucky woman Rahul is madly and truly in love with? Well, actor Rahul Kohli is happily taken by girlfriend turned fiancee, Yasmin Molloy.

But, what makes and Kohli's relationship so special and fascinating is the fact that this man has had his eyes only for Yasmin for the last ten years. Speaking of which, Kohli and his partner Molloy began dating in October 2010 when Kohli wasn't even big and was struggling as an actor.

Not to mention the fact that Kohli and his gorgeous ginger-haired beauty celebrate their anniversary every year on 10th October. Likewise, this year in 2021, Kohli and Molloy will celebrate their eleventh years of togetherness.

And, to get on the exciting part, Rahul who has the initial of his girlfriend aka YM tattooed on his arms has been engaged to his partner for the last three years after the iZombie actor popped the question to Yasmin in July 2018.

In addition to their engagement, Kohli gave his future wife an elegant golden ring with a dark diamond stone in the center while smaller diamonds appeared to be encrusted around it. Of course, the lovebirds shared the happy news on social media with a proper engagement picture. 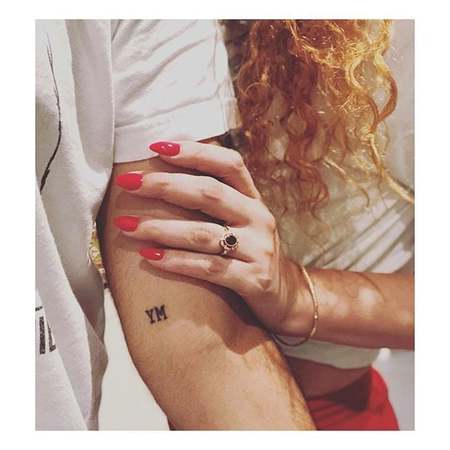 However, as of March 2021, Kohli and his beautiful fiancee Molloy are still yet to tie the knot. It looks like the duo is planning their wedding but the date hasn't been fixed yet. But, when the big day happens, Kohli will definitely let the fans know about it.

Actor Rahul Kohli holds Indian ethnicity while being British as he was born and raised in London. Well, Kohli admitted himself on his Indian heritage identifying that his grandparents were immigrants from India. 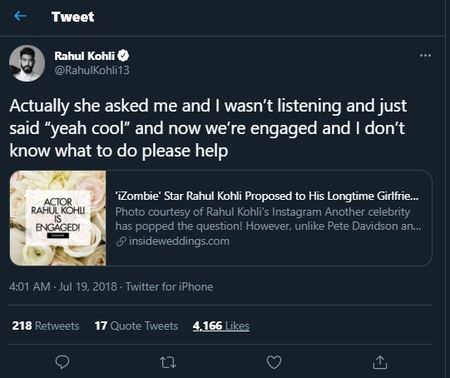 Kohli's mother, however, is from Thailand. Not to mention, Kohli also wrote that he can speak and write fluently in Thai on Twitter. But, it's not certain whether the actor was actually serious or being sarcastic.

Kohli, in addition, is a Punjabi from his paternal side. And, as for his religion, Rahul Kohli is a Hindu.

Career & Net Worth Of Rahul Kohli

Actor Rahul Kohli had been passionate about acting from an early day. It was then when he bagged the role of Dr. Ravi Chakrabarti on iZombie, one of the American famous zombie TV series that Kohli made it big in Hollywood.

But, to have what he has accomplished wasn't an easy journey for Kohli as he began his acting career with minor roles. Speaking of which, Kohli debuted as Tom in the short film, The Vacancy.

Kohli is also one of the main casts on Mike Flanagan's Midnight Mass which can be watched on Netflix. Rahul, in addition, can be expected to hold a net worth of more than $1 million.