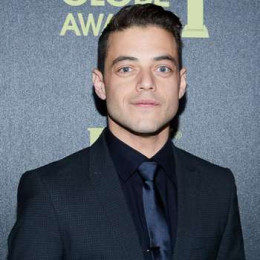 Rami Said Malek is an award winning actor, who came to prominence after playing the lead role of Elliot Alderson in the television series Mr. Robot, for which he won a Critics' Choice Award and received a Golden Globe Award and Screen Actors Guild Award's nomination. In 2004, he began his acting career with a guest role on the TV series Gilmore Girls. From the University of Evansville, he earned his Bachelor of Fine Arts degree in 2003.

When it comes to his personal life, he has always stayed low profile. Till now there is not much information available on the internet about his personal life. People want to know him better as he is so popular and widely praised, but he has managed to keep his private life away from the media. He is rumored of dating the gorgeous Angela Sarafyan and Portia Doubleday.

Rami Malek was born on May 12, 1981 in Los Angeles, California, U.S. to  Egyptianimmigrant parents, Said Malek and Nelly Abdel-Malek. He has an identical twin brother named Sami. He graduated from the University of Evansville with degree in fine Arts in 2003.

Rami Malek made his acting debut in 2004 in Gilmore Girls. He got his major brekthrough in 2010 in a recurring role as the suicide bomber on Fox series 24.

Malek potrayed the role of Freddie Mercury in the Queen biopic, Bohemian Rhapsody in 2018. He won a Golden Globe Award and other several award nominations for his role in the film.

Some of his accolades Movies and TV series are Mr Robort co-starring Martin Wallström, Twilight, Night at the Museum, The Pacific, BoJack Horseman and others.

Rami Malek is in romantic relationship with his Bohemian Rhapsody co-star Lucy Boynton in 2018. Previosuly he dated his Co-star, Portia Doubleday from Mr. roborts.