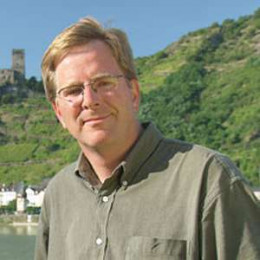 Rick Steves is an American author, TV and radio host, business owner. He has written books as a guide and works as TV host in travel shows as well. He is one of the most respected authorities on European travel. Rick started his first trip to Europe in 1969. He visited piano factories with his father. Rick started his own business in 1976.

Rick Steves is possibly single at the moment but previously, he was previously married to Anne Steves. The couple, however, divorced later. Rick has two children, a son, and a daughter named Jackie Steves.

Rick Steves holds an estimated net worth of $10 million.

Rick Steves was born on May 10, 1955, in Barstow, California, U.S. He graduated from the University of Washington.

Rick Steves began traveling on his own, funding his trip by teaching lessons since the age of eighteen. His company has grown from a one-man operated to a company with a hundred full-time staffs. Rick has produced more than fifty guidebooks on European travels, America’s most famous travel series on public television.

Anne is the first wife of Rick. They were married till 2010 and have two children, a son, and a daughter.

Andy is the elder son of Andy. He is also a travelling enthusiast. There is not much information about him.

Jackie is the second child of Rick. She also loves travelling and runs her own travelling blog.