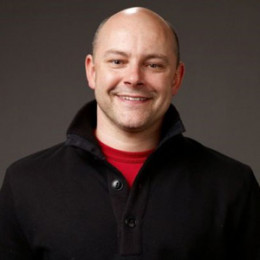 Two times Primetime Emmy Award winner, Rob Corddry is an American actor who created, acted and developed the Children's Hospital. He is also famous for his work as a correspondent on The Daily Show with his brother, Jon Stewart and in a comedy movie, Hot Tub Time Machine. The funny actor, Rob is a married man.

Rob Corddry was born on 4th February 1971 as Robert William Corddry to parents Robin and Steven Corddry. His mother was a Massachusetts Port Authority official. He is a sibling brother of actor Nate Corddry and also has a sister, Nate Corddry, who is an administrator at Southern New Hampshire University.

He attended Weymouth North High School and then joined the University of Massachusetts Amherst. Later, he planned to major in journalism but stuck with it for just two days and focused much of his attention on Drama classes. During the period, he played in the drama play, Torch Song Trilogy, Ten Little Indians, Cat on a Hot Tin Roof, Romeo and Juliet and Reckless.

Then in January 1994, he moved to New York City to further his career in acting. There he worked as a security guard at the Metropolitan Museum of Art and handing out menus for a Mexican restaurant. He eventually landed acting jobs and toured for a year with the National Shakespeare Company and spent two years with the sketch comedy group, Third Rail Comedy.

Rob began his acting from the improvisational and sketch comedy group, Upright Citizens Brigade and an American late-night talk show, Late Night with Conan O’Brien from 1998-2000.

In 2007, he left the show and started working on the American sitcom, The Winner.  His role Dr. Black Downs in the American comedy television series, Children's Hospital rose his fame among the viewers and critics. He created, developed and starred in the TV series along with Milan Akerman, Lake Bell, Erinn Hayes, Rob Huebel, Ken Marino, Megan Mullally. For his hard work and dedication, he received Primetime Emmy Award for Outstanding Short Form Comedy Drama Series.

Rob has also appeared in movies including Blackballed: The Bobby Dukes Story and The Heartbreak Kid, Warm Bodies, Pain & Gain, The Way, Way Back, Sex Tape and many others.

Apart from acting, he hosted the 10th annual Webby Awards ceremony on 12th June 2006. He has also given his voice in the History Channel production World War II in HD: as he is the voice of World War II soldier and jazz musician Roscoe Rockie Blunt. Not only this, he was the co-host of WWE Raw with fellow cast member Clark Duke from Hot Tub Time Machine.

Moreover, he has a recurring role on the third season of Happy Ending, FOX series Ben and Kate and on The Jason Ellis Show. His 2017 acting venture include movies like How to Be a Latin Lover, Shimmer Lake, and The Layover.

Rob is married to his wife Sandra Corddry, since 2002. The couple also appeared on a Daily Show segment as well.

The pair has two children: daughters Sloane Sullivan Corddry and Marlo Stevenson Corddry which completes their happy family. He is a family man and despite his busy schedule gives time to his wife and kids. Currently, the family lives in the lavish house in Los Angeles.

After playing several hit movies and TV series, he has left a good mark in the industry. His source of income includes acting, producing, directing and so on. Altogether, he has successfully collected an estimated net worth of $8 million.

Rob Corddry is married to Sandra Corddry since 2002. It has already been more than fifteen years and till now their love for each other is still the same.