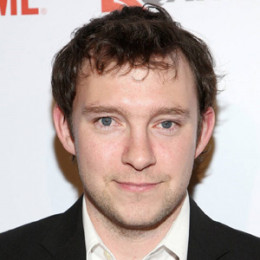 Nathan Corddry, better known as Nate Corddry is an American actor. He is best known for his comic role as Adam Branch in the Harry’s Law and Gabriel in the first two season of Mom. He has made several guest appearances in the series including Law & Order: Criminal Intent, Studio 60 on the Sunset Strip, The Daily Show, United States of Tara, 30 Rock and New Girl. This handsome stud is dating Jessica Renee Russell, TV series actress.

Nate Corddry was born on 8th September 1977 to parents Robin and Steven Corddry. His mother was a Massachusetts Port Authority official. He grew up along with sibling brother, Rob Corddry, who worked as a correspondent on the Daily Show with Jon Stewart, since 2002.

He attended Weymouth High School in 1995 and joined Colby-Sawyer College from where he majored in Communications.

Nate made his TV debut on the American police procedural television series, Law & Order: Criminal Intent in 2003. The same year, he was seen in the American television soap opera, Guiding Light which listed in the Guinness World Records for the longest-running drama in television.

Later, he began his career as a correspondent on The Daily Show with Jon Stewart on 4th October 2005. He along with his sibling brother Rob appeared together in different pieces on the show including the segment Brother vs. Brother, on 21 February 2006. In the segment, they formally debated each other on the issue of Big Brother. During the period, he did some of the commercial work for the Coors Brewing Company, Verizon Communications, Xbox, Dunkin’ Donuts and NYCremembers.org.

He trained at the Williamstown Theater Festival and spent nearly a year traveling on the road as an actor in the Broadway touring production of The Graduate, an American comedy-drama movie of Mike Nichols which starred Anne Bancroft, Dustin Hoffman, and Katharine Ross. The movie earned $104.9 million from different countries at the end of the year.

In 2006, he was cast in the Aaron Sorkin comedy-drama series Studio 60 on the Sunset Stripe with Matthew Perry and Amanda Peet, but unfortunately, the series got canceled in May 2007. He played the recurring role of the Gene Stuart on the Showtime series The United States of Tara which starred Toni Collette, Rosemarie Dewitt, John Corbett, Brie Larson and Keir Gilchrist from 2009 to 2011.

His next successful TV series is Mom created by Chuck Lorre, Eddie Gorodetsky and Gemma Baker which premiered on September 23rd September 2013, on CBS. The TV series starred Anna Faris, Allison Janney, Sadie Calcano, Matt L. Jones and so on. They have done over 88 episodes in 4 seasons.

Apart from acting, he has voice-acted Zed in the Disney XD series Tron: Uprising, an American animated science fiction television series, part of the Tron franchise. Moreover, was last seen it the American techno-thriller movie, The Circle which was directed by James Ponsoldt which starred Emma Watson, Tom Hanks, John Boyega, Karen Gillan and Ellar Coltrane. The movie earned $33.9 million against a production budget of $18 million.

Nate is dating Jessica Renee Russell. She is her girlfriend since several years. The couple did not share the news regarding their relationship, but only after they made a public appearance, their relationship was known.

In February the boyfriend and girlfriend shared their pictures on Instagram celebrating the month of love – Valentine’s Day. The couple is still together, and there is no any rumor regarding their break-up and marriage.

Nate is one of the rising stars of Hollywood industry who has made his appearance in both TV industry and movies. Though his net worth is not disclosed to the media, looking at his successful career, he probably enjoys net worth more than seven figures.