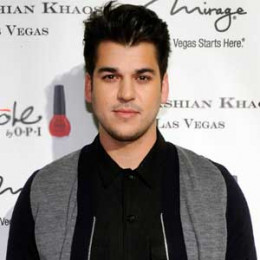 An American television personality plus businessman, Rob Kardashian debuted from the family reality show, Keeping Up with the Kardashians. After that, he participated in the ABC's Dancing with the Star, Fox's dating game show, The Choice and the reality series, Rob & Chyna. In 2012 Rob launched his own company named, Arthur George, a designer sock business. He put his father's middle name as a brand name.

Born on 17th March 1987 in Los Angeles, California to attorney Robert Kardashian and Kris Jenner as Rob Arthur Kardashian is a well known American TV personality. His father was an American attorney and a businessman who died in July 2003 due to esophageal cancer. Whereas his mother is an American television personality known for the reality series, Keeping Up with the Kardashians.

Rob was raised in a well-established family along with three older sisters- Kourtney, Kim, and Khloe. In 1991 his parents divorced and her mother married Bruce Jenner, an Olympic decathlete in the same year. Rob gained three half-brothers- Burton, Brandon, and Brody along with half-sister- Kylie Jenner and step-sister- Casey.

In 2009 he graduated from the University of Southern California. During the same year his sister, Khloe married NBA star, Lamar Odom and divorced in 2016. His another sister, Kim married a rapper, Kanye West in 2014.

Rob Kardashian debuted on TV from the family reality show, Keeping Up With The Kardashians in 2007 along with his family members before the graduation.

After the graduation in 2011, he participated in a reality dancing show, Dancing with the Star season 13 where he paired along with Cheryl Burke, the two-time champion. Rob ended up with a second place competing against J.R. Martinez and Karina Smirnoff.

Moreover, in 2012 he participated in The Choice, Fox's dating game show. After that, he was seen in the reality series, Rob & Chyna and renewed for the second season currently.

While Rob Kardashian was working in Keeping Up with the Kardashian, he dated Adrienne Bailon from 2007-2009. She is an American recording artist, actress, dancer plus singer and songwriter. Their love for each other was seen on the show.

After months of separation with Adrienne, he was again in the relationship with, Rita Ora in October 2012 which was announced on Rob's Twitter. Rita is a British actress plus singer who is popularly known from DJ Fresh's single, Hot Right Now. The couple were together for few months and got separated in December 2012.

Moreover, after two tragic relationships, he was again seen with the model, Blac Chyna. The couple started dating from January 2016 and engaged after certain months of relationship in April 2016. The engagement was announced from Rob's Instagram.

The couple has a baby girl named, Dream Renee Kardashian born on 10th November 2016. Soon after having the baby the couple broke up on 17th December 2016. This was a hot topic for the media.

Rob proclaimed on social networking sites about his separation with fiancé, Blac and the custody of baby was given to the mother. Now he is single right now.

In December 2015, he was hospitalized after falling ill and was diagnosed with diabetes. Again in 2016 he was again hospitalized for the same and left the hospital the next day which shows that he is careless regarding his health condition.

Rob has an estimated  $ 6 million net worth. He earns $ 2 million annually and $11,000 per day from his business and his career in TV. His family bought a house in Calabasas, California that contains a pool, library, four bedrooms and five bathrooms worth $2.3 million in 2016. He is in planning to buy a $ 6 million mansion in Encino.

Rob owns many expensive cars. He owns a Range Rover which was gifted by his ex-fiance, Blac Chyna. He was also caught driving a Lamborgini Aventador, a Mercedes Benz G-Wagon and Porsche Panamera as well.

Dream Renee Kardashian is the only child of Rob Kardashian and Blac Chyna who was born on 10th November 2016. After their split, the child's custody was given to the mother.