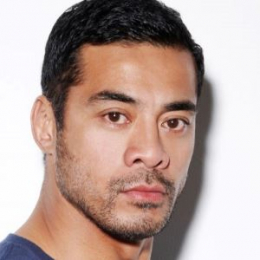 Robbie Magasiva is Samoan - NewZealander actor who is working in the New Zealand entertainment industry for nearly three decades. He is mostly recognized in Hollywood through his role of 'Mauhur' in the movie 'The Lord of the Rings: The Two Towers'.

Robbie Magasiva is currently in a relationship with English actress and writer Natalie Medlock. The couple is together for over together for seven years, and the bond is only growing strong. 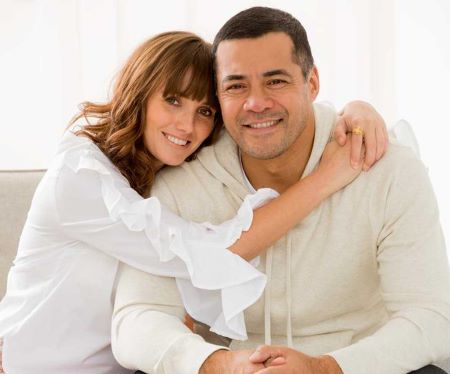 Well, the couple first met in 2011 on the set of the TV series Shortland Street and began dating. However, their relationship went through much ups and downs because of Natalie's depression and anxiety.

"The past seven years have been a journey, but we're coming out the other end of it and we're finally going through that honeymoon phase. There are good and bad days, but our relationship is worth fighting for. I love this woman"

Robbie, prior to this relationship, was dating Alice Gordon. He shares a son named Austin Magasiva (b.1996) and a daughter named Sophie Magasiva(b.2000) with her.

Robbie, in addition to that, was previously married to Anna Magasiva. The couple were married in 2006 and was divorced in 2011.

What is Robbie Magasiva's Overall Net-worth? Know about his Earning and Salary

The veteran actor Robbie Magasiva's overall networth is $1.2 million- 2 million dollars. He earned this wealth primarily through his three-decade-long work in New Zealand Entertainment industry. On average, an actor in New Zealand receives NZ$ 45,000 ($30,435) annually. However, the pay depends on the popularity of the actor and the budget of the movie.

Robbie moreover started his career from Television with the show Shark in the Park in 1990. He continued to work in TV series for a decade, before landing a role in movies. His movie debut was the movie Stickmen with actors Scott Wills, Simone Kessell, and John Leigh.

Robbie, however, gained international recognition when he played the character of Mauhur in the mega-hit movie The Lord of the Rings: The Two Towers. The film earned $926 million at the worldwide office box office against the budget of $94 million.

Robbie, even though he made a mark in Hollywood, he continued to work in New Zealand instead of pursuing Hollywood projects. At present, he is playing the role of Will Jackson in the series Wentworth, which is an adaptation of the iconic prison drama Prisoner.

Robbie, in addition to acting, is part of a comedian group named Naked Samoans. The group performs comedy shows across New Zealand and even produce movies. Their movie Sione's wedding was one of the most successful film of New Zealand in 2006, which earned $NZ3 million($2,029,014) at the box-office.

Thank you Andrew MeLeod for the great pics. Great days ride to raglan with the #everysunday crew love riding with these gents even @nataliemedlock had good time. #harleydavidson #greatcompany #freedom #streetglide

Robbie Magasiva was born on 21 May 1972 in Wellington, New Zealand under the birth sign Gemini. His nationality is NewZealander and belongs to Samoan Descent.

Robbie was born to father Salafa Magasiva and mother Taufaiula Ropati Magasiva. He grew up in a large family with five siblings, four brothers, and a sister. His brothers are namely Stevan Magasiva, Miki Magasiva, Pua Magasiva, and Tanu Magasiva. His sister name is Trina Magasiva.

Robbie inspired his younger brother, Pua Magasiva, to be an actor. He became a successful actor but sadly died on 11 May 2019 at the young age of 38. Robbie got a tattoo on his arm to commemorate his brother's death.

He met her before his famous days when he was working as a receptionist. They do not have any children together.

He is the first son of Alice and Robbie. he has a sibling named Sophie.

She is the first son of Alice and Robbie. she has a sibling named Austin.