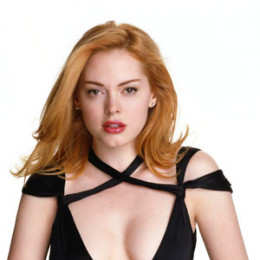 Italian-born American actress Rose McGowan is well known for role Paige Matthews in The WB supernatural drama series ''Charmed'' from 2001 to until 2006. The star is active in the field for years and has earned good net worth.

Is Rose McGowan Married? Or in a relationship?

If talking about the beautiful and talented star Rose McGowan's personal life, she is currently dating a woman. According to her post of 21 December 2019, Rose is into a new guy, a woman. She snapped a cozy picture with her present partner via Instagram referring to her as a favorite woman.

Previously, she has been involved in a few romantic affairs before living a single life for a while. The Planet Terror actress has already been through a number of love affairs and intimate relationships.  Some of them are given below:

McGowan had 3 years and 5 months relationship with rock musician Marilyn Manson. The ex-couple started dating in September 1997, and after 2-years they got engaged. However, in February 2001, Rose ended the relationship with Manson over lifestyle differences.

The former lover Rose McGowan and Robert Rodriguez started dating in January 2006 and got engaged on October 12, 2007. They planned to marry in 2009 but unfortunately split in October 2009.

After 2 unsuccessful relationships, Rose McGowan engaged to artist Davey Detail in July 2013, after one year of dating. They married on 12 October 2013 in Los Angeles, but unfortunately, Rose filed for divorce in February 2016, citing irreconcilable differences. The divorce was confirmed in November 2016.

The star McGown is currently in a relationship with Rain Dove Dubilewski since 2018. Rain moreover is an American actor by profession.

Italian born American actress and singer, Rose McGowan had a romantic affair with Kip Pardue in the year 2001. Further, they enjoyed a girlfriend-boyfriend relationship for around four months.

In early 2007, Rose McGowan suffered serious injuries in a car accident, where her car was struck by the next vehicle and the force of the influence drove her eyeglasses into her face. In the year 2011, she stated that even after the 3 surgical procedures, her right arm remained considerably impaired.

In 2017, the Metropolitan Washington Airport Authority Police issued an arrest warrant against Rose. As per the police, the narcotics traces were found on the actress's belonging left behind in United Airlines flight.

What is Rose McGowan's Net Worth?

The multitalented actress and singer, Rose McGowan have an estimated net worth of $18 million in December 2019. As per Celebrity net worth, she possess a net worth of $6 million. She has added millions of dollars to her wealth from her profession since 1990.

She also earned a big amount of money through television, modeling, music videos, and movies. Rose generates a salary of $50,000-$2 million per photoshoot, movies, and brand endorsements.

In the past few years, Rose earned headlines for helping expose Harvey Weinstein, a former studio mogul's physical harassment habits. She's allegedly raped by Weinstein in 1997 amid a Sundance Film Festival. She was then reportedly paid a $130,000 settlement to shut the affair up.

The talented Rose McGowan debut in a Hollywood film with a part in the 1992 comedy “Encino Man”. Her portrayal of  Amy Blue in the 1995 dark parody movie “The Doom Generation” brought her more extensive consideration and got an Independent Spirit Award designation. She then showed up in the 1996 hit thriller Scream and featured along with Ben Affleck in the 1997 coming-of-age highlight “Going All the Way”.

In 2005, Rose played Ann-Margret nearby Jonathan Rhys Meyers as Elvis Presley in the CBS miniseries Elvis. In 2007, she featured in “Planet Terror”, some portion of the double-feature film directed by Robert Rodriguez and Quentin Tarantino, Death Proof. The next year, she featured in the crime thriller film, “Fifty Dead Men Walking”.

In 1996, Rose McGowan was the cover model for the Henry Mancini tribute collection “Shots in the Dark”, and she was the substance of American garments company “Bebe” from 1998 to 1999. She has also shown up on various magazine covers, including Seventeen, GQ, Maxim, Entertainment Weekly, Interview and Rolling Stone.

The 43-years-old, Rose McGowan was raised in Certaldo, Italy. She is the second eldest of 6 children, and the daughter of Terri McGowan, a former writer, and Microsoft employee, and father Daniel McGowan, a commercial artist. She is English, Irish, French, and Canadian ethnicity and holds Italian and American nationality.

At the age of 10, her parents came back to the United States and settle in Eugene, Oregon. Film-maker, Rose McGowan has associated with a group of drag queens in Portland city. After her parents divorced, she lived with her father in Seattle, Washington. Later then, she attended Roosevelt High School, and Nova Alternative High School, and supported herself by working at McDonald’s.

At the age of 15, Rose McGowan formally emancipated herself from her parents and moved to Los Angeles, where she graduated from the University of California.

As a child, the 5 feet 4 inches tall became a model and has appeared in Vogue Bambini and several other Italian magazines, through her father’s art contacts in Italy.

After 2 unsuccessful relationships, Rose McGowan engaged to artist Davey Detail in July 2013, after one year of dating. They married on 12 October 2013 in Los Angeles, but unfortunately, Rose filed for divorce in February 2016.