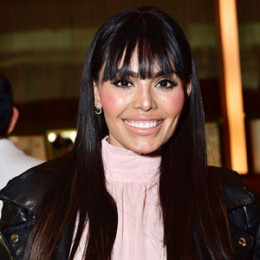 Rosie Mercado is an American fashion designer, plus-size model, television personality and make-up artist. She is best known for being featured on the reality show Curvy Girls on Nuvo TV. She has also been featured on the National Geographic Channel’s documentary entitled Taboo. Mercado was married to an Australian trainer named Kirby Braden Mercado.

The gorgeous model, Rosie was born on March 28, 1980, in Los Angeles, California and grew up in Riverside, California. She belongs to Mexican descent. Her parents were originally from Mexico and used to run a small business in the Las Vegas where she spent most of her childhood.

Rosie joined Bishop Gorman High School and earned a degree in business Management from the University of Nevada, Las Vegas. From her early age, she was a great fan of Jennifer Lopez and Queen Latifah. When she was 16 she joined a radio FM in Las Vegas and started working there at the morning show. After that she worked for Telemundo and Univision doing red carpets interviews with different celebrities

Mercado started her career as a photographer but didn't succeed as she didn't have enough to hire professional models. After doing modeling for four years she established herself in the fashion industry.

In 2009 she entered The Miss Plus America Pageant, she did not win the competition, however, she won the runway competition. She later went on to win the title of Miss Nevada Plus. It was the turning point of her life as she then landed her first spread-The Knot Weddings and Goddess Magazine, won People Choice, CoverGirl and Runway Model.

She has worked as a beauty editor for Mia Beauty and The Best of Brides. She was the only model to work with Oscar Picazo for his book and campaign.

Furthermore, she has been featured in several other magazines including Miss Mexico International, PLUS Model Magazine, SKORCH, Manik and Daily Venus Magazine. She has also been at the television shows and worked as a correspondent with Gossip Meets Couture and has interviewed celebrities including Jenny McCarthy, Carmen Electra, and Kourtney Kardashian.

Mercado has also steeped in the field of makeup and fashion design. She turned her makeup skills into a career and worked for, Miss Latina Beauty and Miss Essence Beauty, pageants. She created Bellisima, a cosmetic collection and also worked with different designers including Larissa Navarro, Jill Alexander, and Yuliya Raquel.

The popular model was married to an Australian trainer, Kirby Braden Mercado. They have three children, a daughter, and two sons.  The couple divorced in 2009.

Rosie has also worked as a motivational speaker encouraging women to be comfortable about their body. She managed to lose weight after she faced embarrassing mobility problems and humiliation just because of her size. She was over 400 pounds and now weighs just 198 pounds.

Rosie who has worked as a model, fashion designer and a TV personality lives a luxurious life as her net worth is reported to be around $4 million.

The popular model was married to an Australian trainer Kirby Braden Mercado. They have three children together, a daughter and two sons.