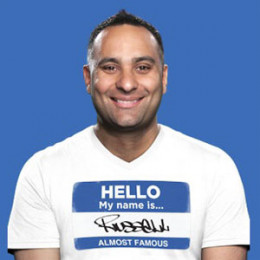 Canadian comedian and actor of Indian descent, Russell Peters is a son of Eric and Maureen Peters. He attended North Peel Secondary School in Bramalea. Peters released his debut comedy album entitled 'Outsourced of his performance' on 26th August 2006. On 26th October 2010, he published his autobiography co-written with his brother Clayton and Dannis Koromilas entitled 'Call Me Russell'.Marketing and Entertainment (SAMMA) for his contributions to the world of comedy.

Russell Peters was born on 29 September 1970 in Toronto, Ontario to Eric and Maureen Peters.

He belongs to Anglo-Indian descent.

He started his professional career in Toronto in 1989. He was at no. 3 on Forbes' list of the world's highest paid comedians in 2013. He was the first comedian to get a Netflix stand-up special.

On 28th September 2013, Peters was awarded the 2013 Trailblazer award by the Association of South Asians in Media, Marketing and Entertainment (SAMMA) for his contributions to the world of comedy.

He received the Peabody Award and the International Emmy Award for Best Arts Programming for Hip-Hip Evolution in 2016.

Russell Peters was in a relationship with Sunny Leone in 2008. He was previously married to Monica Diaz on 10th July 2010 and divorced in 2012. The couple has a daughter Crystianna Marie Peters born on 14th December 2010. He was engaged to Ruzanna Khetchian in October 2016.

I am pleased to announce that my beautiful girlfriend jenniferandrade_ and I are pregnant!! (Well she’s pregnant I’m just carrying baby weight)
In a time with negativity… https://t.co/e0KAfb8e7v

He announced via a Twitter post that he is expecting a child with his girlfriend Jennifer Andrade on 4 December 2018.

He was previously married Monica Diaz on 10th July 2010 and divorced in 2012. The couple has one daughter.

The couple has a daughter Crystianna Marie Peters born on 14th December 2010.