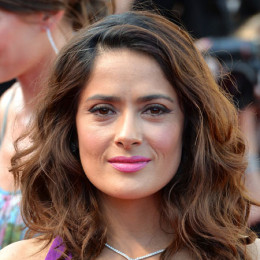 A Mexican-American film actress, a film director who is popular for her memorable performance in the 2002 film, Frida. Along with a hardworking star, she is also a loving mother and a caring wife.

Salma Hayek is married as of now. Hayek tied the knot to her boyfriend turned husband Francois-Henri Pinault in 2009.

The husband-wife moreover shares a child together. Their only daughter Valentina Paloma Pinault was born in 2007.

Salma Hayek has the net worth of $115 million.

Salma Hayek was born on 2nd September 1966 in Mexico. She is a daughter to Jim'nez Medina and Sami Hayek Dominguez.

Hayek moreover attended Academy of the Sacred Heart in Grand Coteau when she was just 12 years old. She studied International Relations from the Universidad Iberoamericana. When she turned 23 she debuted in acting career through successful Mexican telenovela Teresa (1989). In 1994 she starred in El Callejďż˝n de los Milagros for which she was awarded Ariel Award.

The star has also starred in hollywood movies such as Desperado (1995), Dogma (1999), Grown Ups (2010), Puss in Boots (2011) and so on. Till now she has been nominated for various awards like BAFTA Award, Screen Actors Guild Award, Academy Award, and Golden Globe Award. She has also made a guest appearance in ABC television comedy-drama Ugly Betty.

He is a French billionaire and Kering CEO. They performed their marriage in a stunning ceremony in Paris on Valentine's Day. Together they are parents of one daughter.

She is the only daughter of the couple. She is very beautiful and gorgeous. She was born in Cedars-Sinai Medical Center in Los Angeles.