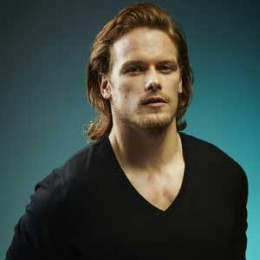 A Scottish actor, Sam Heughan is best known for the hit series, Outlander with the role of Jamie Fraser for which he was nominated twice for Saturn Awards. He has a great fan following of 335k followers on Twitter and 574k followers on Instagram. He is now in relation with an American actress, MacKenzei Mauzy. His breathtaking performances are liked and appreciated by millions of audiences.

Born on 30th April 1980 in Balmaclellan, Scotland. He was raised along with his sibling, Cirdan Heughan. Sam along with his family moved to New Galloway when he was five years old. He is a citizen of America and is of white ethnicity.

After that, he attended Kells Primary School and started living in converted stables in the grounds of Castle Kenmore.

Heughan then attended James Gillespie's High School and left after a year and moved to Edinburgh Rudolph Steiner School and finished his high school education. Moreover, in 2003 he graduated in Music and Drama from Royal Scottish Academy.

Sam began his career from working in theater; his first performance was at the Royal Court Theatre Upstairs for which he was nominated in 2003 Laurence Olivier Theatre Award for Most Promising Newcomer. Sam made his debut with a short film, Small Moments.

Furthermore, he appeared in a recurring role as Scott Nielson in the BBC soap opera, Doctors by Chris Murray in 2009. After that in 2010, Sam worked in the movie, Young Alexander the Great by Jalal Merhi as the main character of Alexender.

Heughan also appeared in a comedy-drama film, A Princess for Christmas by Michael Damian. In 2011 and 2012 Sam played Batman in touring stage show Batman Live.

Later on, he worked in a British-American television drama series, Outlander which was developed by Ronald D. Moore. Furthermore, he was seen in several series like- First Light, River City, The Wild West, Any Human Heart, A Very British Sex Scandal and so on others.

In 2014, he became a supporter for Youth Theatre Arts Scotland (YTAS) and supported the charitable organization's mission. During the same year, he was awarded by the BBC Anglo Fan Favorite Man of the Year, 2014 with the vote of 61% over David Tennant.

PARIS -> LA This guy’s killing it @romannberrux (But French food is better) I let him borrow my jacket.... @outlander_starz

Besides these, he also narrated 8th Installment of author Cassandra Clare's ''Shadowhunter Academy'' series, ''The Fiery Trail'' in 2015.

Moreover, in 2016 he was the first Global Brand Ambassador for Barbour, the iconic outdoor menswear tartan collection and is still engaged with the company. In the same year, he was involved in the New York Tartan Day Parade and also participated in several marathons for the Blood Cancer Charity Bloodwise. Sam is the president of the Bloodwise.

He wished his co-star Caitriona Balfe good luck for her bright future ahead of the Golden Globe ceremony in Los Angeles on January 2019. He took social media to pay tribute to the actress just before the ceremony.

Sam Heughan was in a relationship with MacKenzie Mauzy. Mauzy is an American actress best known for her roles in The Bold and Beautiful Until.

The couple firstly denied about the relationship but later on, they openly announced to the public.

There was a rumor about Sam being close with Caitriona Balfe, an Irish actress, and model. They were caught together many times, but Heughan later addressed the rumors and said they were just friends.

Meanwhile, Balfe shot down the rumors during an interview with Metro UK in August 2017. As of 2018, she is engaged to her fiancee Tony McGill.

Heughan and Amy Shiels are currently dating each other. The Twin Peaks actress and The Outlander star have been sharing a flirty friendship for more than 10 years.

They were rumored to be dating earlier in 2014 and later in 2016 but it was never confirmed.

The handsome hunk, Sam Heughan has an estimated net worth of $5 million. His hardworking and dedication helped him to earn a handsome figure.

Bear Strength Clothing is one of his favorites. Sam owns Maserati, an Italian luxury vehicle.

For more updates, stick on marriedwiki.com!