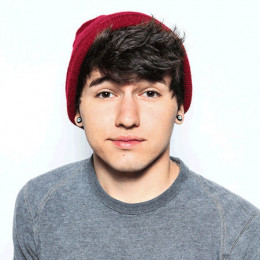 JC Cayel is popular with his presence in YouTube. He owns numbers of YouTube channels like jccaylen, lifewithjc, and theseDudez. He was also a part of our2ndlife but split and has collaborative YouTube channel KianAndJc with Lawley. JC was born with name Justin Caylen Castillo but got his name changed legally to Justin Cloud Caylen. He has also documented his 7 days road life experience and has uploaded in YouTube.

JC Caylen is in romantic association with fellow YouTube sensation. The romance rose as they worked together. He seems happy with the relationship and it has been sometime now, they have been dating each other. There are no other rumors associated with JC so far. He like keeping his personal issues and life off the screen and this YouTube sensation have been able to maintain his personal life private and off the limelight.

JC Caylen was born Justin Caylen Castillo on September 11, 1992, in Houston, Texas, United States. He is  American and belongs to the Hispanic-American ethnicity. He has two sisters, Jaylyn Caylen and Ava Grace and a brother, Joe Felix.

JC Caylen started his self-titled YouTube channel, JC Caylen on September 12, 2010. As of 2018, he has more than 2.9m subscribers. He uploads his first public video, Life with JC in 2010. He was a member of the YouTube supergroup, Our2ndLife along with Connor Franta, Ricky Dillon, Kian Lawley, Trevor Moran and Sam Pottorff.

They went on an international tour and amassed a total 2.7 million subscribers before the group broke up in December 2014.

After a year, his album, Neptones hit number one position on the Top Dance/Rap Albums. Besides YouTube, he appeared in several movies and TV series. In 2016, he portrayed the character of Mikey in the comedy Horror, Boo! A Madea Halloween and in its sequel,  Boo 2! A Madea Halloween.

JC Caylen is in a romantic relationship with Chelsey Amaro. Caylen proposed her on his YouTube video. The duo often spotted together at public places and their cute PDA can be seen on their Instagram.

Previously he dated his fellow YouTube star, Lia Marie Johnson. but the couple failed to handle their relationship and split apart in 2016.

Caylen is a cat lover, recently he introduced his two cats, V and Indie to his fans via Instagram though he has already two cats Vega and Wishbone.

Caylen is quite popular on Instagram, as of 2018 he has more than 3.6 million followers. He gets tattooed on his arm along with his father.

Check out the video of JC Caylen proposed his girlfriend, Chelsey which was viewed more than 2.4m times on YouTube,