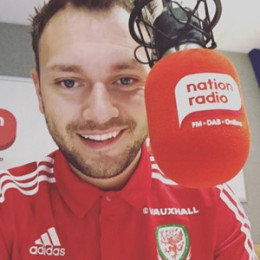 Sam Vaughan is the current boyfriend of most influential gay radio show presenter Scott Mills. He is a radio presenter at Cardiff's Nation Radio.

Sam Vaughan is a native of Bridgend, Wales. He graduated from Cynffig Comprehensive School.

Vaughan is a radio presenter currently working at Cardiff-based Town and Country Broadcasting, Nation Radio. He joined the Nation Radio in 2014. He presents for local radio station 106.3 Bridge FM and 102.1 Nation Hits plus. As of now, he is also Nation Radio's SPI Executive.

Before that, he used to work as a marketing coordinator at Global Radio in 2012.  Besides that, he is also actively involved in fundraising programs like Big Welsh Fundraiser and Ty Hafan.

Vaughan is openly a gay. Currently, he is in a romantic relationship with BBC Radio 1 presenter Scott Mills. They first met and came to know each other through a mutual friend.

Scott started dating Sam after breaking up with his boyfriend, Brad Harris. Scott had a three-year relationship with Brad.

Mills is currently residing at London whereas Vaughan at Cardiff, however, the distance didn’t hinder their affection towards each other. The couple seems to grow more into one another despite being miles away.  They also attended V Festival together and often spend their leisure time together.

As a radio presenter and SPI Executive at Nation Radio Vaughan earn a decent amount from his career. He has maintained a decent net worth in his life.