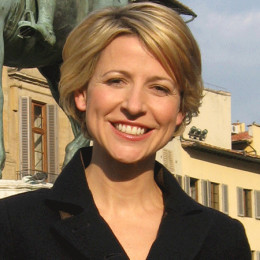 Samantha Elizabeth Brown is a television host and writer, best known as the host of various traveling shows such as Passport to Europe, Great Hotels, Samantha Brown's Asia, Passport to Latin America, Great Weekends, Green Getaways. She is a graduate of Pinkerton Academy. She took voice lessons at Chapman University and was later transferred to Syracuse University to study musical theater.

Samantha Brown was born in 1969 in Dallas, Texas to Elsie Mae Brown and Christopher D. Brown. She belongs to German and Scottish descent.

She completed graduation from Pinkerton Academy in Derry.

Brown is known working as the spokesperson "Wendy Wire" for a firm called Century Cable.

Also, she appeared in the HP Pavilion "Computer is Personal Pain" commercials.

Her personal life is simple, yet sweet. Till now she is married only once and with her husband Kevin James O'Leary.

My husband on a location scout for our last two episodes of season 2 Places To Love. We shoot there in October. It’s an amazingly beautiful country. Can you guess where he is? #placestolove #travel

She welcomed fraternal twins: a son Ellis James and a daughter Elizabeth Mae on 17 January 2013.

When it comes to European Castles these two prefer them “bouncy”. loving our family trip on the Rhine. We were in Rudesheim during a small local festival such a great family friendly place to be. Much appreciated. @amawaterways #germany #rüdesheim

The couple is happy and satisfied since the day they had met each other so there is no point in their divorce. Currently, she resides in Brooklyn, New York.

There are no controversies related to her personal and professional life.

He is the first and the only husband of Brown. The couple got married in the year 2006.