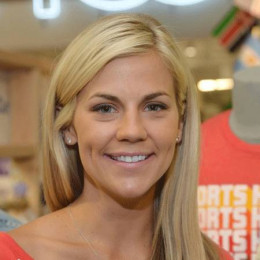 Samantha Sainte-Claire Ponder is an American ESPN Sideline Reporter for college basketball games on ESPN and the host on "College Gameday". She studied at Central High School in Phoenix and enrolled at The King's College in New York City. She worked for Fox College Sports as a sideline reporter for Big 12 and Pac-10 college football and basketball games and Fox Sports Net.

She is a married woman. She married to her long time dated NFL star player. This is her first marriage and from this marriage, the couple is blessed with two children, a son, and a daughter. The couple is often spotted together and seems happy being each other's life partner so there is no point of their separation. There is no any record of her past affairs till today's date.

Samantha Ponder was born as Samantha Sainte-Claire Ponder on December 11, 1985, in Phoenix Arizona. Currently, she served as the host of Sunday NFL Countdown on ESPN.

Ponder joined the Central High School in Phoenix and later attended The King's College in New York City. After completing her education, she applied for a hostess job at ESPN Zone.

Later she transferred to Liberty University after Liberty's Sr. Sports Producer offered her job as sideline reporter for the Liberty Flames Sports.

In 2009, Ponder joined Fox Sports Net and Fox College Sports as a sideline reporter for Pac-10 and Big 12 college basketball and football games.

Ponder worked as a reporter/host for ESPN college football and a basketball sideline reporter. She also appeared on the ESPN-owned Texas-oriented regional network Longhorn Network. She was the host for the 2016 season of BattleBots.

Samantha Ponder is a married woman, she exchanged a vow with Christian Ponder, then-Minnesota Vikings quarterback. on December 17, 2012. Their wedding was an intimate ceremony which took place in Hudson, Wisconsin.

From 2013, she started appearing on ESPN/ABC broadcasts by her married name. The duo was blessed with an adorable daughter, Bowden Sainte-Claire (born on July 2, 2014) named after legendary Florida state coach Bobby Bowden. In June 2017, she gave birth to a boy.

The duo was together for four years and there is no sign of their separation or divorce.

Ponder is one of the highest paid journalists as she paid $4.9 million salary per year and overall $12.2 million. Recently, she bought a house in Phoenix costing $2.2 million.

He is a NFL quarterback who was selected 12th overall in the 2011 NFL Draft by the Minnesota Vikings. The couple have a daughter together.

Her name was given after her father's coach at Florida State, Bobby Bowden.