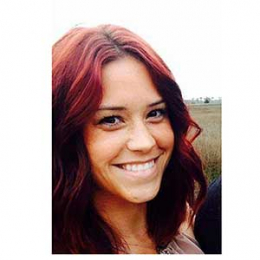 Samantha Rotunda is currently in a romantic live-in together relationship with a mystery man, Dan Pixley. The baby mama and her alleged partner celebrated Easter on April 22, 2019 with their kids in Brooksville, Florida. 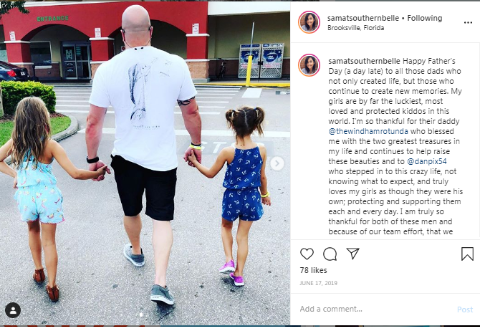 In the snap shared by Samantha on June 17, 2019 on the occassion of father's day, She thanked Dan for stepping into her crazy life. Pixley truly loves her girls as though his own, protecting and supoorting them every day.

Sam is an exceptionally private kind of person who prefers to keep the information regarding her personal life with herself. Besides, she is out of any dating relationship as of 2019 and seems focused on her career. 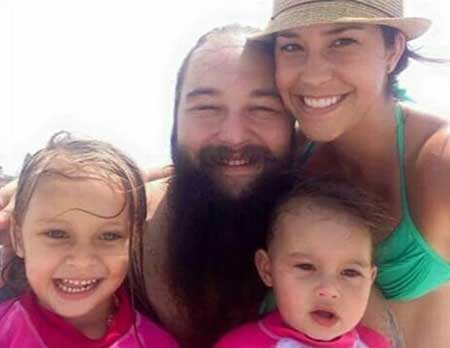 Samantha Rotunda with her ex-husband Bray Wyatt and their daughters.
SOURCE: Mirror

Samantha was believed to be single until when she shared a post on the day after fathers day where both daughters are holding hands of Dan Pixley. The posts consist of a caption saying 'thanks to @danpix54 who stepped into this crazy life, not knowing what to expect, and truly loves my girls as though they were his own; protecting and supporting them every day. I am truly so thankful for him.'

Happy Father’s Day (a day late) to all those dads who not only created life, but those who continue to create new memories. My girls are by far the luckiest, most loved and protected kiddos in this world. I’m so thankful for their daddy @thewindhamrotunda who blessed me with the two greatest treasures in my life and continues to help raise these beauties and to @danpix54 who stepped in to this crazy life, not knowing what to expect, and truly loves my girls as though they were his own; protecting and supporting them each and every day. I am truly so thankful for both of these men and because of our team effort, that we are working on each and every day, my girls are growing into amazing little woman (who will never ever date....ever, if these guys have any say). It’s not always easy, but it’s our life, and they are what matters! #coparenting #fathersday #blendedfamily #luckygirls #myheartissofull #daddy #bonusdad

It's, not the only post she shared she also shared a post with the caption 'family' with Dan,

So is there something cooking between the duo, well we will have to wait and see.

Samantha was previously married to the famous WWE superstar Windham Lawrence Rotunda a.k.a Bray Wyatt. The duo was a college sweetheart who turned their dating relationship to marital relationship in 2012 after dating for several years.

Just after the five years of marital relationship, Samantha found her husband cheating on her with fellow WWE ring announcer JoJo Offerman so she decided to file for the divorce in 2017. As of 2019, the pair are officially divorced after staying together for mediation due to the order of the court.

The pair further were the proud parents of their two children, one older daughter named Kendyl Rotunda who was born in 2011 before the pair tied the knot. Their second daughter is Cadyn Rotunda was born in 2013.

Samantha later filed for divorce by requesting the custody of her daughters fully to her stating Bray wasn't much around with daughters. Further, she also demanded $15,000 per month in spousal and child support in the divorce file and also the house she currently lives with her daughters.

As of now, she is awarded a temporary monthly income of $14,735 as well as a one-off payment of $50,000 to cover legal expenses. Though Wyatt has denied paying the bills, he paid the bills after being forced by the court.

What is the Net Worth of Samantha Rotunda? Know about her Earnings, Salary

Samantha Rotunda is a private person who hasn't disclosed much about her professional career. Besides, her ex-husband is a WWE pro wrestler who owns a net worth of $5 million. Also, he earns a total of $1 million per year for his ring performances.

Rotunda currently lives in a house situated in Florida. The house originally belongs to her ex-husband but after the divorce, the court handed her the house. Following that, the average price of a house in Florida is $299,000.

On 27 January 2020, Samantha put the beautiful Sugarmill Woods, Florida house on sale for $175,000 offered by realoremilybarr.

Samantha Rotunda was born in December 1986(age-32 years old as of 2019) in the United States. She holds an American nationality. She was born to her father Curt Krieger and mother Patricia Krieger. 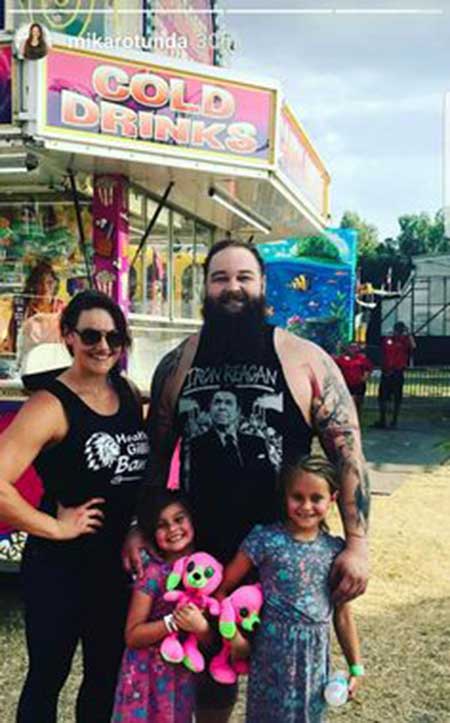 Miss Rotunda earned her graduation from Troy University. Rotunda is active on Instagram where she gathered over 308 followers as of 2019. She stands at a height of 5 feet and 3 inches with a pair of brown eyes and black hair.

Samantha was previously married to the famous WWE superstar Windham Lawrence Rotunda a.k.a Bray Wyatt. The duo was a college sweetheart who turned their dating relationship to marital relationship in 2012 after dating for several years.

Samantha and Brey were a proud parent of their two children, one of them is a daughter named Kendyl Rotunda who was born in 2011 before the pair tied the knot.

Samantha and Brey were a proud parent of their two children, one of them is a daughter named Cadyn Rotunda who was born in 2013.