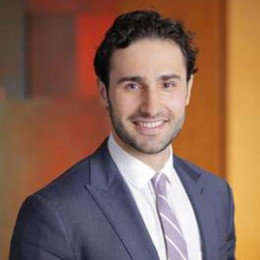 Max Shifrin is the husband of American television host and journalist of Good Morning America, Sara Haines. He is a lawyer at the New York firm Baker & Hostetler LLP. He and his wife share two children together after months of their marriage.

Max Shifrin was born and raised in New York, USA. He attended the University of Connecticut and passed with a degree in History and Political Science in 2005. Later, he earned J.D. from Brooklyn Law School in 2010.

When he was at Brooklyn Law School, he worked as a Student Prospectors for 11 months at the U.S. Attorney’s Office. After completing higher education, he worked as an associate at Fried Frank from 2011 to 2013.

After that, he worked for Storch Amini & Munves, PC for over a year. Currently, he is a lawyer of the New York firm Baker Hostetler, since June 2014.

According to his firm bio, he mainly focuses on complex commercial litigation and has represented large institutions, small businesses and individual’s clients across a wide range of industries and has experience overseeing all aspects of pre-trial litigation.

Moreover, he is also on a team as court-appointed counsel for the Securities Investor Protection Act (SIPA), Trustee for the Liquidation of Bernie Madoff’s firm, BLMIS which involves more than 1,000 lawsuits filed by the SIPA Trustee to recover assets for the benefit of defrauded BLMIS customers.

Max is a married man and famous American television host and journalist, Sara Haines, is his wife. The pair tied the knot on 22nd November 2014 in the Bahamas.

Merry merry Christmas from the Haines/Shifrin!! Seeing our little family with my #Haines family (the originals + my niece & nephews) has my cup running over. @maxshifrin @george5ge @abby_george_

The husband and wife first met through the online dating site OKCupid; which was their first step to find the love of their life. Sara received a message for the first time in her OkCupid profile and decided to meet for drinks one night.

One more to Alec’s left should do it.

After living two years of marital relationship, the pair welcomed their first child, baby boy, Alec Richard Shifrin, on 5th March 2016. According to the sources, Sara is pregnant and expecting their second child which she announced on The View on 20th June 2017. Similarly, they share their second child, SAndra Grace Shifrin on 23rd December 2017.

Altogether, Max along with his wife Sara has an estimated net worth of $1 million. He made an average salary of $167,670 from the law firm, Baker Hostetler. When it comes to his wife, she has an accumulated fortune of around $6million.

Currently, he is living in a luxurious house in Brooklyn, New York. They own two chihuahuas (Mexican dog) as their pet.

Max Shifrin is married to an American television host and journalist of Good Morning America. She is well known for her work as a correspondent on Today and ABC News. Also, she is a co-host of The View, an American talk show.