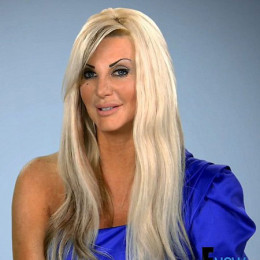 The walking advert Sarah Burge is a former Bunny Girl as well as surgery proponent known for the hundreds of cosmetic surgeries she has undergone. She made the headline for gifting vouchers for cosmetic surgeries to her young daughter Poppy.

Sarah Burge was born Sarah Goddard in 1960 in St Neots, Cambridgeshire. She was a cosmetic surgery proponent from the very early age. She underwent her first cosmetic surgery to correct an overly-prominent ear at the age of seven. She then had her lip and jawline done when she was in her 20s.

Burge experienced the devastating violence from her ex-boyfriend which left her disfigured for six years. Her passion of going under the knife started to develop from that time.

Sarah’s experience of disfigurement and the effect of corrective surgery resulted in her becoming an advocate for cosmetic surgery. Later she took a nursing training and opened a cosmetic surgery consultation service in Harley Street. She went through more than 100 procedures till the date.

Sarah was convicted of fraud for making the false statements to the UK Government in the mid-2000s. She illegally claimed almost £2,000 housing and Council Tax benefits admitting it with full consciousness. She stated that the money was used in her buttock enhancement surgery.

The 52-year-old Burge is a married woman. Anthony Burge is the current husband of Sarah.

Before getting married, she had a romantic affair with British actor Dean Gaffney. The couple got engaged before splitting up after ten years of their relationship. They even welcomed their two twin daughters Chole and Charlotte in 1997. She welcomed her youngest daughter Poppy in 2005.

In 2010, Burge gained the mass public attention when she confessed that she gave pole dancing lessons to her then six-year-old daughter Poppy. She also faced the criticisms from many people including the host Anderson Cooper when she made her appearance in the show the Anderson Show on 22 May 2012.

Anthony Burge is the current husband of Sarah Burge. They are living a blissful and contented married life together.

Chole Gaffney is one of the twin daughters of Sarah Burge and her ex-fiancee Dean Gaffney. She was born in 1997.

Charlotte is one of the twin daughters of Sarah Burge and her ex-fiancee Dean Gaffney. She was born in 1997.

Polly is the youngest daughter of Sarah Burge. She was born in 2005 which makes her 12 years now.