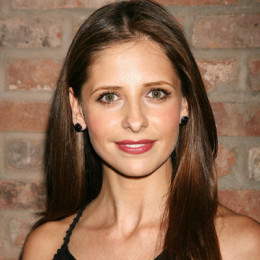 An Hollywood actress and producer who made her debut in movie named An Invasion of Privacy. She was only one daughter of Rosellen, a primary school teacher and Arthur Gellar, a garment factory worker. When she was just seven years old her parents got divorced and she was brought up by her mother. she completed her highschool from Columbia Grammar & Preparatory School. She was discovered by an agent when she was eating in local restaurant when she was just 4 years old.

Sarah Michelle Gellar was born on April 14, 1977, in New York City, New York, the U.S. to mother, Rosellen, a nursery school teacher and father, Arthur Gellar, a garment worker. She comes from a mixed descent as her father was German Jewish and mother was Hungarian Jewish.

After her parents divorced in 1984, she lived with her mother in Upper East Side of the city. She lost touch with her father and only came to attend his funeral in 2001. In the early 2000's she talked about her relationship with her father stating,"My father, you can just say, is not in the picture. I'm not being deliberately evasive about him, it's just that there's so little to say."

She began working at an early age to support her family and also managed time for figure skating. She stood third at a New York State regional competition. Further, she was a black belt and placed fourth at a Tae Kwon Do competition at Madison Square Garden.

Geller attended Columbia Grammar & Preparatory School on a partial scholarship as her mother couldn't pay the full fees. In an interview with The Independent, she revealed that she was constantly bullied for that reason. She said,
"I was different and that's the one thing you can't be at school because you're ostracised. I didn't have the money these kids had."

During her school days, she was involved in many acting projects, hence missed out on most of her classes. In school, she had made up an excuse saying that she had a back problem and had to go for a regular checkup.

Later, she attended Fiorello H. LaGuardia High School of Music & Art and Performing Arts, however, she dropped out to focus on acting. Despite her good grades, her teachers threatened to fail her due to her constant absenteeism. In 1994, Geller graduated as a straight A student with an average grade of 4.0 from the Professional Children's School.

Geller was discovered by an agent in a restaurant in Upper Manhattan, and after two weeks she auditioned for television film An Invasion of Privacy in which she impressed the directors winning her the role of Jennifer Bianchi. She then appeared in a commercial for Burger King which came to controversy as her character in the ad criticized McDonald. McDonald filed a lawsuit which led to Geller being banned from eating at McDonald's. She also modeled for Wilhemina.

Her early work includes Spenser, Crossbow and For Hire. When she was nine, she appeared in the Broadway production The Widow Claire starring Eric Stoltz and Matthew Broderick.

In 1992, Geller starred in syndicated teen series Swans Crossing, and her performance in the series won her two Young Artist Awards nominations. One of her significant roles came in 1991 appearing in All My Children as Kendall Hart. She was praised for her role by critics and fans earning her more appearances in the series. Her magnificent performance won her a Daytime Emmy Award for Outstanding Younger Actress in Drama Series.

Gellar is most known for her role in Buffy the Vampire Slayer as Buffy Summers winning her nominations for five Teen Choice Awards, a Golden Globe and a Saturn Awards. She got further recognition after appearing in I Know What You Did Last Summer, Cruel Intentions and Scream 2.

Some of her famous movies include Scooby-Doo 2: Monster Unleashed, The Grudge series, The Air I Breathe, The Return and Southland Tales among others. She is credited for her roles in Sex and the City, Angel, Ringer, The Crazy Ones and Robert Chicken among others.

Five-time Teen Choice Award nominee, Sarah Geller has earned an estimated net worth of $17 million. She earned $90,000 per episode from Ringer. She appeared in a total of 22 episodes making around $1,980,000. For her roles in The Grudge and Scooby-Doo: Monster Unleashed she recieved $60,000 and $4,500,000 respectively.

Geller from her infamous role in Buffy the Vampire Slayer earned her a salary of $350,000 per episode in Season 7 and for her role in Cruel Intentions, she earned $500,000.

She and her husband Prinze Jr. bought a house built in 7,100 sq. feet area in L.A for $61 million. The home features 6 bedrooms and 5 baths. It also included an outdoor pool with waterfall, library, gym and a media room.

The star of Buffy the Vampire Slayer is also involved in many charitable works. She is an active member of various organizations like Project Angel Food, Habitat for Humanity, breast cancer research, and CARE.

She met her husband,  Freddie Prinze, Jr. on the sets of the horror movie I Know What You Did Last Summer. But they started dating only in 2000 after three years of their first meeting. They got engaged on April 2001 and they finally got married in Mexico on September 1, 2002. The couple parent two children including one daughter and one son. The family is living happily in Los Angeles, California.

He is an English actor who is famous for his role in movies like Scooby-Doo , Friends. After dating shortly they got married and now he is father of two children.

She is the first child of Prinze family. She is very beautiful and gorgeous for her picture can be found in internet.

He is the second child of the couple. His picture can be found along Prinze family picture in different sites.