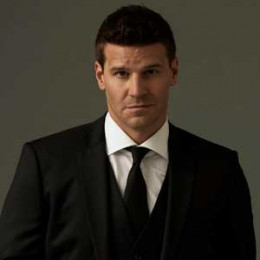 David Boreanaz is an American television producer, director, and an actor. He is known for his role on Buffy the Vampire Slayer, bones and Angel. Dave Roberts, his father used to work as a weather forecaster and his mother, Patti Boreanaz was a travel agent. He is of Italian descent. He had completed his graduation from Ithaca College in photography and in cinema.

David Boreanaz is an American actor, television producer, and a director too. He was born in New York on May 16, 1969. His father Dave Roberts was a weather forecaster and mother Patti Boreanaz was a travel agent.

He has two older sisters, Bo Boreanaz, and Beth Boreanaz. Born and raised in the US he holds the American nationality and belongs to the White ethnicity.

At the age of 7 years old, he moved with his family to Philadelphia, Pennsylvania and attended Rosemont School of the Holy Child at Rosemont, Pennsylvania.

Later he went to Malvern Preparatory School in Malvern, Pennsylvania. In 1991, he graduated in cinema and photography from Ithaca College.

During his struggling days, he used to sleep on a couch, he used to made props for movies.

In 1993, Boreanaz got his first paid for acting in the American sitcom, Married... with Children. Later he was cast in the Buffy the Vampire Slayer.

However, in 2001, he got his first major role in Valentine (Horror Movie) along with Denise Richards and Katherine Heigl.

David Boreanaz has appeared in numerous movies and series where we can see his amazing acting skills such as;  Bones, The Mighty Macs, Officer Down and much more.

He involved in producing and directing too. He produced the Bones since its third season and also directed at least one episode every season since its 4th Season.

David is a married man, he gets married twice. In 1997 he wed Ingrid Quinn but due to some personal issue, the duo ended their relationship in 1999.

Following the divorce with the first wife, David exchanged the vow with very beautiful actress Jaime Bergman on November 24, 2001.

Together they shared a son Jaden Rayne Boreanaz (born on May 1, 2002) and a daughter Bella (born on August 31, 2009). David hasn't any children from his previous marriage.

In 2010, Boreanaz was rumored to have an extramarital affair with Rachel Uchitel and at that time his wife is pregnant with the second child.

In 2013, Boreanaz along his wife and friends started the nail polish line Chrome Girl. He shared a very good equation with his Bones co-star Emily Deschanel.

Boreanaz was listed as 50 Most Beautiful list on People magazine. He also listed in the Top Ten Sexiest Men of the Buffy. He likes animals especially dogs.

David has succeeded to earned lots of fame in his career but besides that, he is a good earner too. Recently his estimated net worth is whopping $22 million dollars.

His first wife is was a social worker.But after two years the couple got divorced.

After getting divorce with his first wife he got married to an actress. The couple is living happy life and still together.

He has two children from his second wife. His first child is a son named Jaden Rayne Boreanaz.

His second child is a daughter from his second wife too. Her name is Bardot Vita Boreanaz.