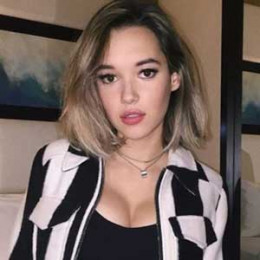 An American fashion model, Sarah Snyder came to the limelight from 2015 after having a relation with the actor, Jaden Smith. She did photo shoots with Urban Abstract Photography where one of the best photographer, Martin Osner did some photo shoots. Sarah was arrested for stealing Herman Birkin Handbag from Bedford, New York that worth $16,000. She is also known as a mugshot girl who showed her acting skills in Scarlet Rain.

Sarah was born as Sarah Irene Snyder on 30th July 1995 in the United States. She is an American and is of white ethnicity. She kept her schooling information confidential.

Sarah started her career as a model before earning fame. She worked for Urban Abstract Photography 2014 where one of the best photographer, Martin Osner did some photo shoots.

Moreover, Sarah also appeared in Scarlet Rain, a horror film in 2010 opposite Matt Walker with stars- Jonathan Shea and Alex Pepper. She is as popular as Chantel Jeffries, ex-girlfriend of Justine Bieber.

Before dating her ex-boyfriend, Jaden Smith, she was charged with one count of breaking and entering, Larceny and Conspiracy in Mecklenburg Country, North Caroline.

The beautiful, Sarah Snyder was arrested in 2015 in accusation of stealing Herman Birkin Handbag from Bedford, New York that worth $16,000. After four months of investigation, she was charged with felony grand larceny and sentenced 56days to jail and also paid $7500 as a penalty for bail. During that time, she was in dating Jaden Smith, but the couple did not break up even after such case.

Sarah Snyder was in relation with Jaden Smith in 2015 who is four years younger than her. Her boyfriend, Jaden is an actor (The Karate Kid), dancer, and rapper who won an MTV Award for his work in The Pursuit of Happyness. Before dating Snyder, Jaden was in relation with Kylie Jenner, a reality star.

Snyder and Jaden share a strong bond together and are happy with each other. They were caught several times in different places kissing each other. The couple also announced about the relationship through social networking sites too.

But unfortunately, being together for two years, they broke up. Recently, Jaden was seen with Sasha Lane, an actress at Paris Fashion Week sitting.

Sarah is single and enjoying it with her friend and one of them is Chantel Jefferies, ex-girlfriend of Justine Beiber.

The net worth of Sarah is not revealed yet. She is a young fashion diva as and wears branded and gorgeous outfits. Millions of fans admire her fashion sense. She is also a sensation in social networking sites as got more than million followers on Instagram.