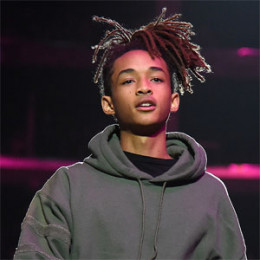 American actor, Jaden Smith made his Hollywood debut at an early age of eight. Smith is a rapper, songwriter, and singer as well. He earned massive popularity after his significant performance in the movie, The Karate Kid. He is the son of famed actor Will Smith. He has appeared in other popular movies such as Pursuit of Happyness and Men in Black II. He rapped alongside Canadian singer, Justin Bieber in the song, Never Say Never.

Jaden Smith was born Jaden Christopher Syre Smith on 8th July 1998 in Malibu, California under the birth sign, Cancer. Smith is American as per his nationality, and as far as his ethnicity is concerned, he is African-American. He is the son born to famed actor Will Smith and Jada Pinkett Smith. Smith has two siblings; Trey Smith (half-brother) and Willow Smith (younger sister).

Smith was homeschooled after attending New Village Leadership Academy. He alongside his siblings are youth ambassadors for Project Zambi. The project provides assistance for Zambian children orphaned by AIDS in conjunction with Hasbro.

Jaden Smith made his Hollywood debut in 2002 from the film, Men In Black II. He made a cameo performance in the film.

In 2006, Smith starred in the movie, The Pursuit of Happyness. He was cast alongside Will Smith, Thandie Newton, Brian Howe, Dan Castellaneta and James Karen in the movie. The movie was his first movie with his father.

Smith appeared in many other popular movies in his career. His other notable works include The Day the Earth Stood Still, After Earth and The Karate Kid.

Smith earned massive popularity after his wonderful performance in the movie, The Karate Kid. The movie was released on June 11, 2010, and is the remake of the 1984 movie, The Karate Kid. He shared the screen with Jackie Chan, Wenwen Han, Taraji P. Henson, Zhenwei Wang, Yu Rongguang and Luke Carberry among others.

In 2011, Smith performed with a popular Canadian artist, Justin Bieber in an American 3D concert film, Justin Bieber: Never Say Never. The concert film was officially released in the U.S. on February 11, 2011.

Currently, Smith is working in some of the movies such as Life in a Year and Untitled Crystal Moselle Project. The movies will be released in 2018.

Smith debuted in the series appearing in the TV series, All of Us in 2003. He then appeared in the series; The Get Down in 2016. He shared the screen with Justice Smith, Shameik Moore, Sklyan Brooks, and DJ Zeke among others in the series.

As of 2017, Smith worked in the TV series like Neo Yokoi by Ezra Koenig and Nashville by Callie Khouri.

In 2010, Smith rapped with Justin Bieber in the song, Never Say Never. The song was certified 5x platinum in the U.S. and peaked at #8 on the Billboard Hot 100.

Smith released his first mixtape, The Cool Cafe on October 1, 2012. He released the sequel of the mixtape titled Cool Tape Vol. 2 on November 8, 2014.

Smith announced the title of his first studio album would be titled Syre in December 2016. He worked for three years for his debut studio album. The album was released on November 17, 2017.

Jaden Smith received nominations for various prestigious awards for his roles in the movies and won some of them as well. His notable awards include:

Jaden Smith has reached the age of 19 now. Currently, The Karate Kid star is dating his new girlfriend, Odessa Adlon, an actress. Odessa is a daughter of popular American actress, Pamela Adlon.

The couple is spotted kissing his new girlfriend while peddling his clothing brand at a street-side flea market in LA. In 2017, they made their red carpet, where both of them were looking cute.

As per the online sources, they started dating in early 2017. Their relationship was confirmed after they were spotted together cuddling on the Miami Beach.

Before dating Odessa, Smith was in a relationship with Sarah Snyder. They started dating in early 2015. Snyder was arrested in June 2015. Synder was alleged of stealing the Herman Birkin Handbag worth $15,995.

Synder was finally set up with a public defender and taken to a judge, who set her bail at $8,000. The couple broke up after staying in the relationship for two years.

Following their break up, Smith was spotted with an actress, Sasha Lane. They appeared at the show with mirror-image high ponytails.

Smith involved in several relationships in the past. In 2014, Smith was rumored to be dating The Hunger Games star, Amandla Stenberg. The pair attended a prom night together and appeared at many events together.

The gorgeous actress, Amandla turned out to be a bisexual. The fact was confirmed after she uploaded a snap chat video and also called herself as a black bisexual woman to all the audiences and the media.

Smith dated an Instagram sensation and a model, Kylie Jenner in March 2013. He described his relationship with Jenner as one of his best friends. Their relationship came to speculation after Jenner was spotted at Justin Bieber's concert in London, where Smith was performing one of the acts. Both the stars never confirmed their relationship.

In November 2012, Smith was rumored to be dating a fashion model, Sofia Richie. However, the relationship was not confirmed. He was spotted with an unknown girl in mid-2015. They were spotted together strolling through the city.

Smith was said to have dated Stella Hudgens in the past. However, the relationship has not been confirmed.

Smith also dated American actress, Madison Pettis. The couple was in a serious relationship in 2010. The pair was together for more than a year and later broke up.

Smith came to controversy after he criticized traditional education. He also passed a statement talking about teenagers who go to public school stating, "kids who go to normal school are so teenager, so angsty.’’

Jaden Smith stands the height of 5 feet 8 inches (1.74m). The Karate Kid Star has an estimated net worth of $8 million.

Smith also collected a great amount from his clothing line called, MSFTSrep which includes fancy clothes. Along with this, he also created a pop-up store with Choi Bum Sul, a Korean designer.

Over the past years, Smith earned the total amount of $2.51 billion. He signed a contract worth $1 million for two Karate Kid films. He also earned a bonus amounting $2 million after the movie made the total gross of $359.1 million worldwide. He was paid $3 million as the performance fee for the movie.

Smith owns a house worth $20 million located in Calabasas, California. The mansion is inspired by Moroccan, Spanish, Persian, and South American culture. He also owned a Tesla Model X that worth $85,000.